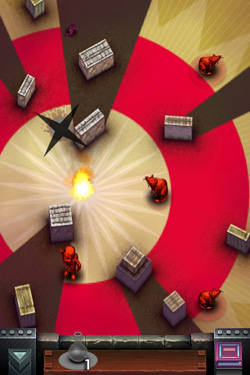 The iOS platform, with it’s basically nonexistent barrier-of-entry, really is a haven for indie developers; it’s just great to see so many fresh, new types of gameplay emerging for — and thanks to — the iPhone and family. One such game is the upcoming puzzle title Helsing’s Fire from Ratloop, to be published by Chillingo.

Helsing’s Fire sends you on a quest to destroy Dracula, placing you in 90 randomly generated, dungeon-like levels across three different worlds (The Abandoned Village, The Haunted Forest, The Cursed Castle), peopled by the 13 different monster types that comprise Dracula’s horde. The challenge is to eliminate said beasties by moving your torch about the screen, which casts brilliant beams of light and dark shadows about the play area. Light up as many ghouls as you can and strike with a powerful tonic, banishing them to oblivion. But, be careful — not all that dwell in The Shadow Blight are creatures of darkness, and those that aren’t must be spared. It’s a highly innovative puzzle mechanic that is best illustrated in video.

The game features both a Story Mode and a Survival Mode, only the former being available at first, with the Survival Mode opening up after a bit of Story Mode play. The three Survival arenas are based on the three game worlds. Other features include touch controls, a dynamic light and shadow system, stylized hand-drawn sprites and character portraits, and online leaderboards and achievements thanks to integration with Crystal. And, according to the developers, the great emotive audio tracks in the preview video are part of the actual game soundtrack.


Helsing’s Fire has likely been submitted to the App Store by now and should be available any time. Readers anxious for the game’s arrival are discussing it quite favorably in our forums.

Ratloop’s previous offerings include Mightier (PC/Win) and Rocketbirds (Flash), both of which were Independent Games Festival finalists. The developer has posted some before / after pics showing progress in the development of Helsing’s Fire to our forums.