Austin, Texas based iPhone developer Pangea Softwarehave been making video games since their inception in the late 80’s. Originally targeting the Apple IIGS, Pangea has been hopping to each new Apple platform as they’re released, this time tweaking their existing iPhone games to run at the native 960×640 resolution of the iPhone 4’s Retina Display. As mentioned in our first impressions post on gaming with the iPhone 4, increasing the output resolution of existing games doesn’t really add to gameplay at all… But it sure does look good. 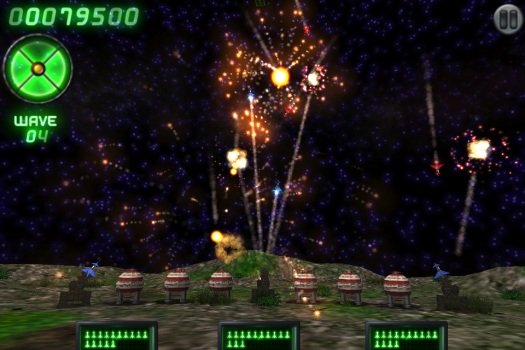 Noteworthy games that have been updated include:

Enigmo – Starting its life as a Mac game, Enigmo is a physics puzzle game that was voted Best iPhone Game at WWDC in 2008. In the game you move various objects around the game board to direct water droplets to their destination. Levels start easy and get so hard you will be desperately searching Google for the solution. (App Store)

Enigmo 2 – This sequel takes the same basic gameplay of the original and adds a third dimension to the puzzles, which makes things even more difficult. Before long, you’re not only routing water droplets around, but also laser beams. Both games are worth having, although you should probably start with Enigmo before adding the complexity of moving puzzle pieces in 3D in Enigmo 2. (Review, App Store)

Warheads – Warheads is basically Missile Command combined with one of those oddly elaborate 3D fireworks screensavers. The gameplay is classic Missile Command with four directions to defend from instead of just one. The eye candy combined with the frantic camera shaking as missiles are exploding make for a pretty cool experience, especially on the iPhone 4. (Review, App Store)

Nanosaur 2 – Also starting as a Mac game, Nanosaur 2 was ported to the iPhone in late 2008. It hasn’t aged very well compared to Pangea’s other games, but the premise of piloting a massive dinosaur from the future who is equipped with a massive arsenal of weaponry couldn’t get much more ridiculous and/or awesome. (App Store)

I’m glad to see so many iPhone 4 Retina Display updates coming along, especially this soon after the launch of the device. These are just my favorite games of theirs, they have many other iPhone and iPad games on the App Store that are worth checking out as well.