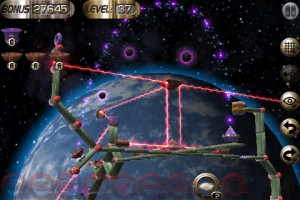 Enigmo [App Store] was originally created in 2003, and since has become Pangea Software’s most successful game. The iPhone port was announced at WWDC ’08, then went on to a positive reception in iTunes reviews and also was voted the “Best iPhone Game" of WWDC ’08.

The goal of Enigmo is simple, water falls from droppers and a certain number of drops need to make it in to the tank at the end of the level. Utilizing a limited number of objects from the variety of different ones that make up the puzzle pieces in the game such as bumpers to bounce drops off of and sponges to collect drops, etc., the gameplay of Enigmo started simple but quickly made way to levels that would leave you stumped for days.

Enigmo 2 [App Store] took the award winning gameplay of the original, made everything 3D, and even added lasers and plasma particles that must also be directed to their respective containers. Enigmo 2 takes place in space, and gravity plays an even bigger part than the original with objects that can be dropped in game to manipulate gravity to steer the plasma particles around. 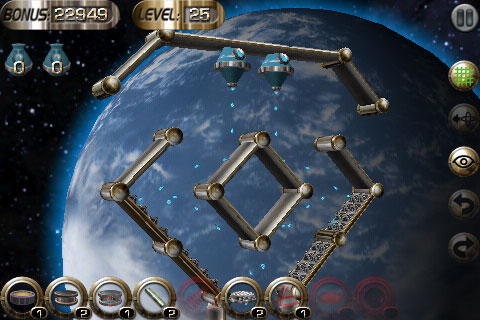 The graphics in Enigmo 2 aren’t the only thing that’s in 3D, the game world can rotated using two finger swiping gestures, and some puzzles will require the placing and manipulating of objects in 3D space to complete the level. Pangea Software came up with a remarkable way to handle the placement of these objects, as usually manipulating the position of something in 3D using a 2D interface can be an exercise in frustration.

In Enigmo 2 if you want to position an object under another object, such as the dropper to get something under the stream of water droplets, all you have to do is tap the dropper and every object you drop in to the game field will be aligned to it. It’s an elegant solution and I’m honestly quite surprised that it works as well as it does.

Pangea Software released the following video that details nearly every corner of Enigmo 2, and is really worth a watch if you’re at all interested in the game:

Enigmo was one of the first iPhone games I spent a considerable amount of time playing. Some of the puzzles in the original would leave me completely stumped, only to find myself having a complete epiphany later in the day as I realized that I was attempting to solve a level completely wrong. If you liked the first game, you will love the sequel. All the additions to the game add to the winning formula of the original, and I can see myself spending just as much time completing the 50 levels in Enigmo 2 as I did in Enigmo.