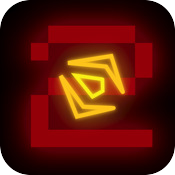 Nearly one full year ago, the original PewPew was released onto the App Store during the height of dual-stick space shooter popularity. Despite the massive influx of similar games around this time, PewPew managed to gain some notoriety for its retro-inspired vector graphics, responsive controls, frantic game modes, and the reasonable price tag of free. Many players even commented on feeling slightly guilty for having scored such a quality game for nothing at all. Luckily for them, and for the rest of us, the chance to show monetary gratitude is at hand as PewPew 2 is now available for $1.99. It expands upon everything that made the original so successful and adds a challenging single player campaign, enhanced graphical effects, and a couple of other neat surprises. 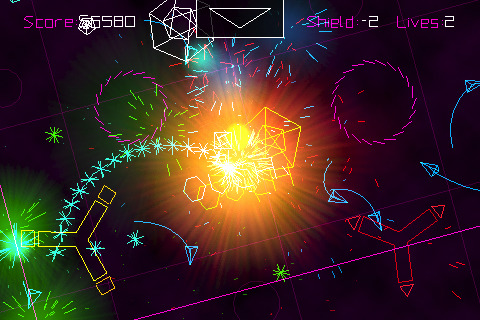 The biggest new addition is the Campaign Mode, made up of ten separate levels. Each of these levels are incredibly unique from one another, and some pose a devastating difficulty. (Note, the difficulty has been a point of discussion in our forums). Every gameplay element that was present in the first game is utilized in some way throughout the campaign, as well as many clever new ideas. As just one example, the level Spring Theory tethers your ship to a point in the middle of a room and tasks you with trying to avoid ever-increasing enemies within the limited mobility, and once you’ve survived the onslaught for 50 seconds, shooting every last one of them. More so than any other game, PewPew 2 tests your ability to dodge enemies just as heavily as it does your ability to blast them, and the campaign is a satisfying and varied experience that exemplifies that.

If you get stuck at a particularly hard spot in the campaign, you can always take a break and jump over to Infinity Mode which houses all the modes that were present in the original game (MegaGore, Dodge This, Assault, and Chromatic Conflict) in addition to two brand new ones. The first is called Highway and has you racing around a circular track dodging and shooting enemies while trying to collect orbs as quickly as possible. The other new mode is Amalgam, and is somewhat like Assault but with the added element of many enemies. Both new modes are a lot of fun and fit in well with the rest of the game. Amalgam and Chromatic Conflict are locked initially, and can be accessed by completing the Campaign Mode at 50% and 100% intervals respectively. Gold, Silver and Bronze medals can be earned in every mode and used to unlock five additional ship styles. Also, every mode has a local and online leaderboard, with the full replay of each player’s entry being easily viewable.

There’s already a lot of great content in PewPew 2, and there’s even more on the way. The developer is working on another campaign that will be at least as long as the first and two additional game types for Infinity Mode. This, along with universal iPad support, will be coming soon via free updates. There’s also a desktop version in production for Windows/OS X that will give players the ability to create their own levels, which could conceivably be added into the iPhone version at the developers discretion. It will be interesting to see how this exciting project and the future of the iPhone version turn out.

The current version of PewPew 2 is one of the best dual-stick shooters available, and is well deserving of its modest price tag.  The original PewPew is free, and will eventually be updated as a proper lite version for the sequel, so if you want to get a taste of the gameplay give the first game a try.