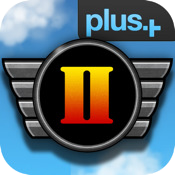 One of the mainstays on our devices since its release almost a year ago is Cobra Mobile‘s aerial bombardment game, iBomber. Evidently many of you liked it too as it enjoyed long bouts as the #1 best selling game on the App Store last year. And now, Cobra Mobile has bought us the long-awaited sequel as iBomber 2 [AppStore] finally deploys.

iBomber 2 theatre of war takes place over North Africa and Europe between 1943 and 1944, prompting a change in scenery from the Pacific Island setting of the original game to also include deserts, frozen tundras and forests too. The game engine otherwise remains untouched, so expect no graphical improvements beyond the new landscapes, which are all richly drawn and detailed. 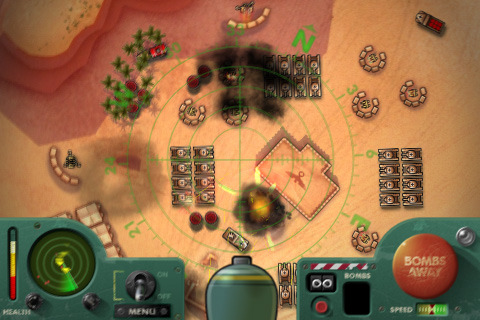 Instead, iBomber 2 focuses on a few added features to sell its sequel. Naturally, the stars of the show– the artillery– had to receive an update. They now include torpedos and depth charges (specifically designed to fight submarines), artillery strikes (which places a marker for a broad-ranged attack to commence) and carpet bombs (a lot of ordinance, all in a neat row). Other new, non-artillery power-ups include the wingman ability, which calls in 2 wingmen to fly below you and soak up your damage for a time. 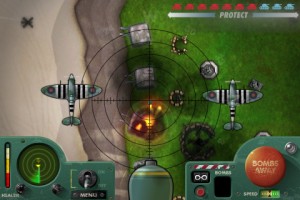 Missions and enemies are the second spruced up feature in iBomber 2. There are now tanks to contend with, some of which may even fire surface-to-air missiles (leaving a great looking smoke trail) that you have to avoid or suffer a huge damage hit. Additionally, some of the 12 new missions require you to protect or destroy a number of fleeing vehicles, assisting to mix up the usual search and destroy objectives of other levels. We were particularly fond of one level where you supported a spy to flee after he comes under fire when infiltrating an enemy base. Seeing other units benefiting from your actions gave added context to the ongoing war, something we felt should have featured more prominently.

Another major inclusion to iBomber 2 is the new touch control scheme. Cobra Mobile have listened to cries for a non-tilt option, and have implemented a virtual thumb-stick of sorts. Swiping your finger on the left of the screen reveals a small analogue stick, indicating the direction you are currently heading. Swiping left and right steers the bomber, whilst swiping up and down changes your speed. We felt that while the new touch controls were a thoughtful addition, they proved too fiddly to master and were prone to causing your ship to spin erratically. For a change, the tilt mechanism is tried and true, and continues to work best here.

We were surprised to see a rather paltry list of added features in iBomber 2, appearing to be little more than a map expansion despite the addition of a few fun new weapons. We were really hoping for an improvement to the core gameplay of the first game, but aside from the abovementioned chase missions, other objectives are largely the same. That said, when your original game is met with the sort of success that iBomber enjoyed, perhaps more of the same is exactly what customers are demanding.

If this sounds to your liking, then we’re confident you’ll enjoy playing through the 12 missions in iBomber 2 and seeing how you’ll fare against your friends via the new Plus+ high score integration. If you’re still not sure though, check out the developer’s trailer above for a look and flick through other users’ impressions on our forums.