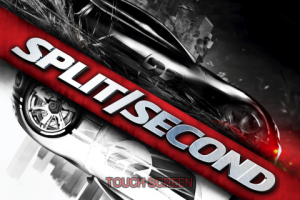 Over the weekend I got some hands-on time with Disney’s upcoming action-packed racer, Split/Second. Developed in house utilizing scaled down versions of the assets from the XBOX 360 and PS3 version of the game, Split/Second for the iPhone is a fun racing game with a great sense of speed and a cool gameplay mechanic that involves blowing up portions of the track to change the layout of the course and sabotage opponents.

In Split/Second, you compete in a fictional reality television show where you compete for fame and fortune. Included are three gameplay modes: Season mode where you play through the TV show, quick race where you can play any unlocked track, and multiplayer mode which not only can be played locally via bluetooth and WiFi but also online. 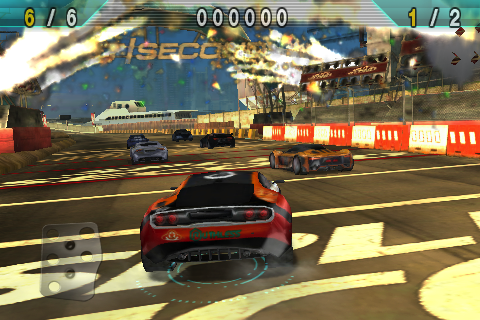 While racing, you build up your powerplay meter by driving well, drifting, going over jumps, and other things you’re going to be doing anyway as you rocket around courses. You can then spend this earned powerplay resource to do things like cause a bus to explode and come flying out on to the track, or even take out entire bridges in one massive fireball to act as a shortcut for the rest of the race.

The pace of the game is incredibly fast, so much so that I couldn’t help but crash once in a while, without the AI opponents needing to sabotage my race. The framerate great on my iPhone 3GS, and Disney did a good job of replicating the feel of the console version which currently has free downloadable demos available on both the Xbox Live Marketplace and the PlayStation Network store.

Of course the down side to having a freely available console demo to compare this game to is you can see exactly how much they needed to strip out of the game to get it to run as well as it does on the iPhone. The XBOX 360 version is loaded with particle effects, insane explosions, and all sorts of other graphical flare that does a great job at setting the action-packed mood of the game.

Split/Second for the iPhone is still pretty cool, but I can’t help but feel that a little of what makes the console version so great was lost in translation. Check out the series of gameplay trailers compared to the above gameplay video to get an idea of what I’m talking about.

Regardless of what may be missing from the iPhone version of the game, the online multiplayer functionality could turn out to be the true killer feature of Split/Second. If the community takes off, I could see having a ton of fun with this game– I suppose we’ll see when the game launches on the 18th of this month.