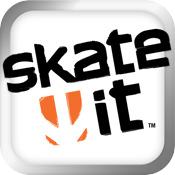 Originally released on the Nintendo DS in late 2008, Skate It by EA Games is something of a portable semi-sequel to the original Skate game for Xbox 360 and PS3. It utilized the DS’s touch screen to mimic the unique gesture based Flick-it controls of it’s console brethren, and delivered a relatively robust experience for such a small package. Now, coinciding with the console release of Skate 3 this week, the iPhone version of Skate It is now available. It’s an experience that’s virtually identical to its DS counterpart in content, but vastly superior in graphics, ease of use, and overall presentation. A relatively difficult learning curve will likely turn off many players initially, but those who persist will be rewarded with one of the finest portable skateboarding games available.

The bulk of the game takes place in a Career mode that spans 20 separate levels, 13 taken straight from San Vanelona (the fictional city featured in Skate) and 7 levels based on real life locations that are exclusive to the Skate It series. It’s not one big open world like the console games, but each level is fairly large and filled with plenty of challenges and skateable terrain. New goals are constantly unlocking as you progress, and the Career challenges are all interesting and varied. You’ll perform specific tricks for photos, play S.K.A.T.E. against AI skaters, enter high score contests, and more. There’s even challenges that have you participating in checkpoint races against other skaters across the map, which proved to be especially fun. The graphics of the iPhone version utilize much higher resolution textures and a smoother framerate than that of the DS. It’s much more visually appealing now, but oddly the actual skater animations when performing tricks seem a lot more fluid on the DS. 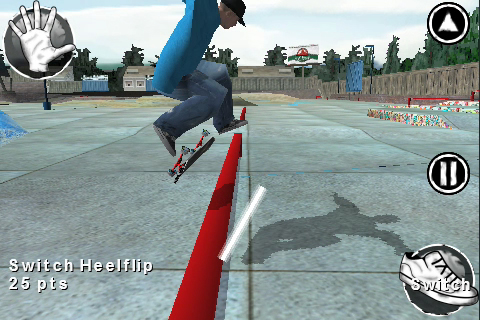 While there’s certainly a great deal of content in Skate It, whether you’ll be able to enjoy it or not ultimately depends on if you can get behind the control scheme. Tilting the device left or right steers your skater in either direction, tilting the screen away from you crouches the skater, and tilting towards you slows down. There’s no option for touch controls to perform any of these actions. I’m not generally one that likes tilt controls in games like this, and it took me a good hour of practice before I started to really feel comfortable with it. Some may pick it up much quicker, others may never quite take to it. Once you get it down though, it’s a far more immersive experience than a virtual analog stick and actually quite enjoyable. 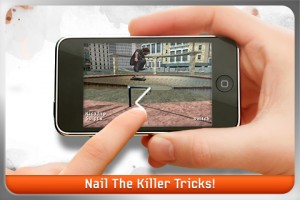 As for the onscreen Flick-it controls, they have been implemented fairly well here and are far easier to utilize than they are on the DS. Holding that system with one hand while awkwardly trying to wield a stylus to perform touch screen gestures was an exercise in frustration. On the iPhone however, it feels very natural to draw the various trick motions using your thumb or index finger while comfortably holding the device. The amount of different maneuvers you’re able to perform with this system is incredible, and although touch recognition is a little spotty sometimes, pulling off tricks in Skate It is a blast. One welcome addition in the iPhone version is Trick Mode, the ability to slow down time while doing a trick. Placing your finger on the screen slows everything down (how slow can be configured in the options), affording you more time to draw the correct gesture. It works really well and helps ease new players into the Flick-it system if you’re not familiar with the Skate series. 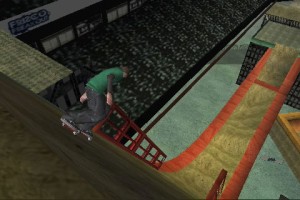 A huge advantage Skate It has over it’s competitors, namely Tony Hawk’s Pro Skater 2, is a large focus on customization. Your avatar for Career mode can be personalized with different faces, clothing, and skateboards. An editor allows you to draw your own logos or board graphics simply by drawing on the screen, and then apply them to your character. There’s the option to listen to your own iPod music while playing, although the included soundtrack of licensed songs is very good. Also, there’s a fairly robust park editor that let’s you set up many different obstacles to your liking in a large warehouse. You can save up to three different created parks, but due to a lack of any online component, you’re unfortunately not able to share these parks with other people as in the DS version. Still, creating parks adds an infinite amount of replayability and potential for experimentation. Different park objects and items for your character are unlocked as you progress through the Career, giving you incentive to complete the game’s challenges.

In the end, Skate It for iPhone greatly improves upon the already impressive game that was found on the DS a year and a half ago. A lot of care has gone into suiting the entire experience to this platform, and the simple fact of not needing a stylus goes a long way in making it more accessible. Whether or not it takes the current skateboarding crown from THPS2 will largely be a matter of personal preference. Skate It wins in content, graphics, and customization but has a steep learning curve with the controls that may never feel comfortable to some. THPS2 is slightly smaller in scope, but has familiar controls and ten years worth of nostalgia on its side. Honestly, they’re both fantastic games that are worth your time. If you’re looking for a more realistic portrayal of skateboarding and are up to the challenge of learning the controls, Skate It delivers a wealth of content with style, and is easily recommended for skateboarding fans.