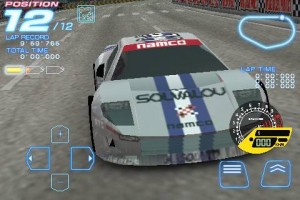 Namco’s Ridge Racer Accelerated [App Store] was released late last year, and we weren’t very crazy about the game in our review. Basically, poor performance combined with poor tilt controls and a wacky DLC system made for a racing game that was hard to recommend even when you take its arcade racing roots in to account.

In the recent update, Namco thankfully implemented two new control options: A virtual analog joystick and a virtual D-pad that actually makes the game feel a lot like the original on the Playstation. No matter how hard I tried I could never wrap my head around maintaining a proper drift around corners with the tilt controls, but using the new D-pad setup I’m burning around tracks with ease. I’m not really a fan of the analog joystick setup, but for me, Ridge Racer has always been about tapping D-pads.

Performance also seems to be improved substantially, as the game actually runs how I would expect it to on my iPhone. Namco also added a time attack mode and the ability to listen to your own music in game along with a host of other tweaks and bug fixes. 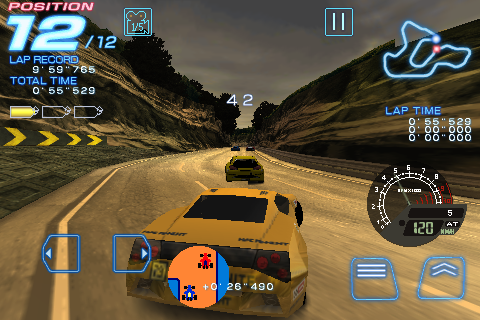 Unfortunately, even though Namco has added some extra content it’s still hard to get behind the DLC model they’re using in their games. Currently, if you want everything Ridge Racer has to offer, you’ll need to fork out $2.99 for the game, $1.99 for a pack of fast cars, and an additional $2.99 for more tracks. I really wish Namco would just start offering their games for a flat price, as it’s surprisingly annoying paging through the game’s various selection menus and seeing all of this content you still need to pay for.

If you purchased Ridge Racer in the past and have since removed it from your device or forgot about it, you really should give the new update a spin. The new control options really made the difference to me in that I’m actually able to play the game now. If you haven’t pulled the trigger on downloading Ridge Racer yet, I’d consider some of the other better racing games available on the App Store such as Real Racing [$4.99 / Free] or Need For Speed: Shift [$6.99].