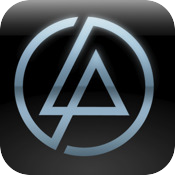 There’s been a number of games released on the App Store featuring mainstream music acts such as Lady Gaga, Metallica and Coldplay. So it didn’t really come as much of a surprise to see Linkin Park 8-Bit Rebellion arrive over the weekend. What does come as a surprise however is that this isn’t rhythm-based like most other music games, but rather a side-scrolling beat-em-up of sorts with a heavy focus on social networking. It sounds strange, and it kind of is, but it’s also quite refreshing to see something other than the expected. The result ends up being more of an interesting experience, rather than a solid game.

The story has you helping each of the six members of Linkin Park to find their stolen music track. Once all tracks have been found, they complete an exclusive new Linkin Park song which will save the world… or something like that. You’ll travel through the seven different locations in the game talking to different characters for clues and performing menial tasks that eventually lead you to each track. The gameplay is a bit shallow and repetitious, and incredibly easy. Battling enemies is done by merely mashing an action button, but there are some pretty cool weapon upgrades to help spice it up a little. 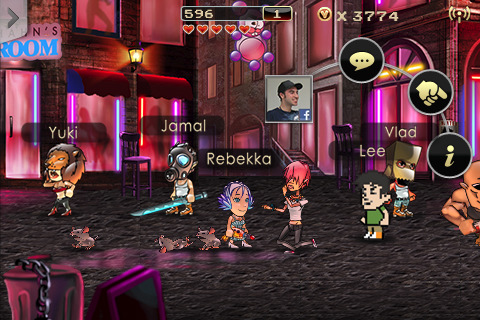 During play you’ll collect coins from defeated enemies which can be spent in the shops spread throughout the seven game settings. You can buy gear for your avatar or furniture and decorations for your apartment. There’s a heavy focus on this collection and customization aspect, and there’s lots of different items for you to buy in the game. 8 Bit Rebellion does a great job of providing fan service with this, and the real life artwork and posters of Linkin Park albums can be adorned on your apartment walls. Even better are the music tracks in the game, which are familiar Linkin Park songs that have been given the 8-bit treatment. I’m not the biggest fan of Linkin Park, but I couldn’t help but enjoy the retro versions of their songs. There’s eight songs in total, and during the game you’ll unlock all the original versions of them as well so you can compare them to the 8-bit remakes.

What really shines about this game is the online component. You’re constantly connected while playing, and you’ll see the avatars of players from around the world walking around inside of your game. At any time you can tap on one which brings up a menu to check out their profile, “poke” them á la Facebook, or even engage in real time chat with them. It’s fun to see these people roaming around, and I’ve already run across some familiar usernames from people in our forums. Each level even has a bulletin board where anyone can post a message for all to see. Full Facebook and Twitter integration are included so you can post various game accomplishments and search out friends. If none of this sounds appealing to you, the entire game can be played just fine offline.

If you’re a fan of Linkin Park, you’ll likely get a lot of enjoyment from playing through 8-Bit Rebellion. The gameplay is a little too simplistic for serious gamers, but it can still be fairly entertaining at times. It’s almost as if River City Ransom, Zombieville and Facebook decided to make a game based on their love for Linkin Park. In reality it feels like the type of game that actually would be played on a social network like Facebook. If this sounds interesting to you, you’re definitely getting a high quality experience that’s been designed beautifully to suit the iPhone interface. If you’re not a huge fan of the band, however, 8-Bit Rebellion may just be a little too flimsy to hold your attention.