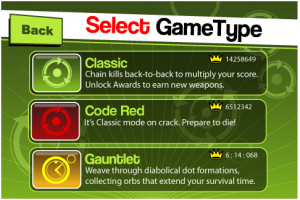 We announced last month that Tilt to Live [$1.99] would be getting an update in April with two new game modes, and today that update has been released. Included are the new Gauntlet and Code Red game modes, leader boards for each mode, and six new awards provided by the AGON social platform.

Tilt to Live is an accelerometer-based blow-em-up for the iPhone and iPod Touch that we reviewed last month and gave 5 stars.

Here are descriptions of the two new game modes:

Run the Gauntlet to put your precision tilting skills to the test! In Gauntlet mode, players compete for the longest survival time rather than highscores or combos. Enemies waves will no longer relentlessly chase you. Instead, the dots work together to form an increasingly difficult treadmill course of smashers, battle axes, windmills, and more. It’s an entirely new gameplay experience! The difficulty curve will be comparable to our original gametype, a crescendo from manageable to kick-your-butt. Early dot obstacles and gameplay will be showcased in our teaser video, and even more sinister twists are in development as we speak.

Rather than guiding players along a polite difficulty curve, we’re chucking them off a difficulty cliff with Code Red mode. This gametype is best described as “Classic mode on crack”. Everything from Classic is there, but the red dots will spawn at their highest intensity right from the start. It’s tailor-made for experienced players that “just wanna get to the good part”, without enduring the buildup.

The developers, One Man Left Studios, also say that future updates will bring new game modes, weapons, awards and even iPad support that we are really looking forward to.

Here is a video of the new Gauntlet mode: