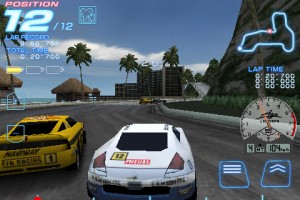 It doesn’t seem that long ago that I was completely blown away by Ridge Racer on the original PlayStation (which actually was a port itself) along with most of the gaming press at the time. Nearly 15 years later and here we are playing a comparable game on our phones. Namco’s recently released Ridge Racer Accelerated [App Store] provides a lot of the same arcade racing feel as the rest of the game series, but similar to Ace Combat Xi or Pac-Man Championship Edition, the game has launched with part of the total content– the rest either requiring in-game microtransactions or apparently coming via future updates.

Like most racing games, steering is controlled by tilting and other functions like braking or changing gears with a manual transmission are linked to on-screen buttons. Auto-acceleration is configurable in the options and defaults to off. The controls work well enough, but it seems like the tilt steering is a little touchy, even after fiddling with the sensitivity in the options. It wasn’t anything game breaking, just noticeably less smooth compared to other racing games on the platform. 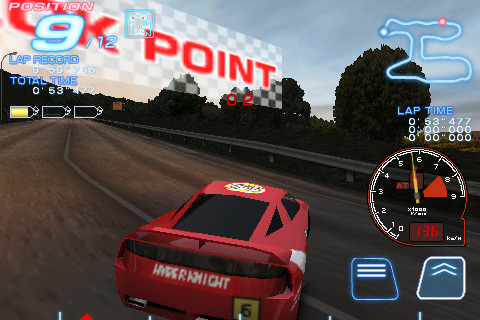 The arcade driving style will be instantly familiar to anyone who has played a Ridge Racer game before, but may seem strange to newcomers to the franchise as performing well in races requires a great deal of drifting around corners. Drifting is easy to initiate, all you have to do it steer in to a turn, let off the gas, and press it again and your car will be going sideways. Learning to control your drifts instead of just spinning out takes quite a bit of finesse and a lot of trial and error until you get a feel for how much to turn in to them.

The graphics of the game pale in comparison to other racing games available on the iPhone– Especially when it comes to the shockingly low complexity car models. You would think these comparatively low levels of detail would be part of a trade-off for an insanely high framerate, but Ridge Racer Accelerated’s iTunes description mentions that the iPhone 3GS is the “recommended" platform with 3G optimizations “coming soon". Except the game doesn’t even perform particularly well on the 3GS, and forum members are reporting the game is flat out unplayable on older devices. (Something we haven’t entirely been able to replicate in our testing.)

For reference, here is me racing poorly on an iPhone 3GS:

Much like other recent Namco games, Ridge Racer Accelerated is a veritable DLC piñata. Initially coming loaded with only two tracks (or four if you count driving the opposite direction on those same tracks) and 18 different Class 1 and Class 2 vehicles are available (6 unlocked, 12 unlockable). 6 (3 + 3 in opposite direction) additional tracks are available for $2.99 and 9 Class 5 vehicles available for $1.99.

Early reactions have been mixed on the game. Basically, it seems if you can get past the disappointing performance, long time Ridge Racer fans can still have fun with the drift-heavy racing style the game offers. The ultimate goal of each level is really to beat your previous lap times across the tracks and cars included. There’s no career mode or global high scores offered. Ridge Racer offers Arcade, Duel and Survival modes using the same tracks and cars.

Further discussion and impressions can be found on our forums.