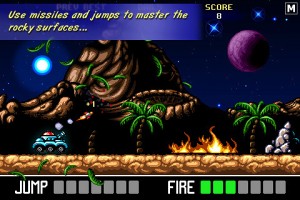 Donut Games seems to have figured out the formula behind fun casual gaming with another great game release in Action Buggy. We profiled the developer in February after they’d found success with games like Rat on a Scooter XL, Titanic Rescue, and Comet Racer.

Action Buggy may have a Moon Patrol vibe but the actual game feel is somewhat distinct. You control a constantly moving moon buggy and have two controls: jump and shoot. Shooting fires rocket forward, and jumping sends you skyward. Your job is to last as long as possible, while destroying moon rocks, trees and basically avoiding death. Crashing into a rock, falling into a hole or driving into open flames will bring your game to a quick end.

One distinct feature behind the controls of the game is that neither your jump nor your shooting is a simple on/off toggle. Press longer while jumping and you can do long jumps or press multiple times for mini jumps — but only up to a certain point. When you press to shoot, the longer you press the further your shot will go. The result is a hard but really fun game.

Forum user Boardumb captures the resulting challenge well in his evaluation of the game:

This is a pretty hard game. It has that “pat your belly and rub your head" thing going for it. It’s tough to wrap your brain around doing both the jumping and firing appropriately. At first, I was just spamming the rockets while only concentrating on the jumping. I thought, how could they overlook such a cheap mechanic? Then I discovered that if you rocket the bare ground, it creates a crater that will crash your buggy. So basically all that spamming will get you is unrideable terrain and a quick death. You have to actually put effort into aiming your rockets while jumping hazards, and not screwing yourself over on your landing. It balances things out nicely, and makes for some frantic fun.

Here’s the developer video showing it in action:

Action Buggy is one of those games where the average game session is measured in seconds rather than minutes, but in that elusive “success is just another try away" way. The game contains global high scores, costs just $0.99, and is recommended.