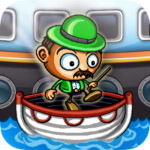 The historically questionable premise of the game revolves around loading “gentlemen", as the game calls them, from the sinking Titanic in to the lifeboats below. These gentlemen eventually jump on their own, but a flicking motion on the screen also sends them flying skyward only to hopefully land in one of the boats or lifebuoys floating along side the ship. Sliding your finger along the bottom half of the screen controls the location of these life saving vessels, and for additional bonus points, gentlemen with matching suits can be loaded in sets of three in each life boat. 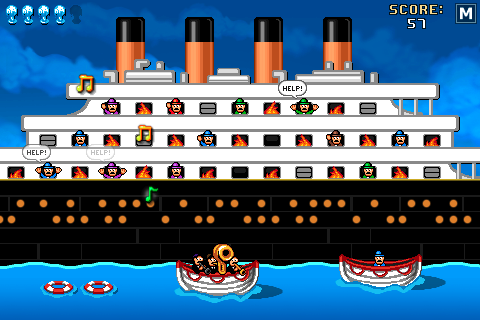 The longer you play, the more obstacles are introduced. For instance, fog obscures your view of the gentlemen on the ship and lifeboats loaded with three piece bands eventually are included in the series of boats on the bottom of the screen. Needless to say, gentlemen can’t be loaded in to the boats with bands in them. The game continues until five gentlemen have splashed in to the ocean.

One extremely puzzling omission is the lack of any kind of scoreboard, either online or local. Inside of the options menu there is a button for your overall statistics, which list the number of gentlemen you’ve saved along with color matches, sunken boats, and total playtime. The only other stat that is saved is your all-time best, which I guess does the job, but I’d still rather see the top 10 scores.

Despite the lack of a more robust score recording system, Titanic Rescue is still a lot of fun. The simple gameplay gets challenging quick with the introduction of different obstacles, and it’s hard to not enjoy a game based on such a silly concept.