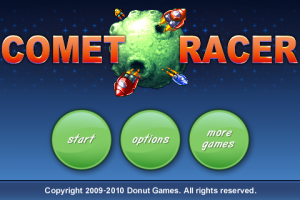 As a big fan of time trial games, I took immediate interest in Comet Racer [App Store], the newest release from Donut Games. Comet Racer has you piloting a small craft through the mazelike interiors of comets in a mission to complete each of its 25 different levels in as few seconds as possible. With a unique global leaderboard system and a great physics engine, this is a game that fans of other recently released time trial games like Hook Champ or Jet Car Stunts will enjoy.

Each level in Comet Racer opens with the unveiling of your ship on a launch pad, and an old-school traffic light slides in from the left to give a three second launch countdown. Using a thruster button on the right side of the screen and the two left/right directional buttons on the left, controlling your ships around hairpin turns and through slim corridors is an easily-acquired skill. Crashing into a wall will cost you one of your “lives" (displayed in the form of tiny spaceships at the top left corner of the screen) and cause a significant drop in speed, making it more difficult to finish the level under the given qualification time. 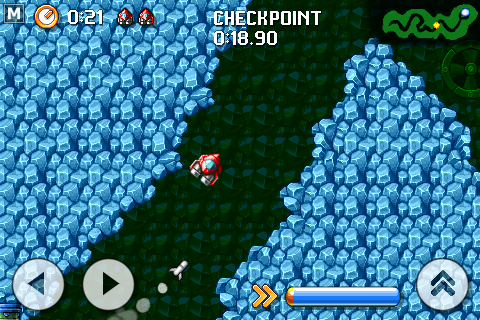 I normally don’t like games that require players to unlock all of its levels by beating every level in order (as this can cause players to get stuck on one particular level and become frustrated) but I feel that it’s not a real issue in Comet Racer since players will rarely have much difficulty finishing levels. The game is tuned so that levels aren’t difficult to complete, but so that it’s challenging for players to attain a three-star ranking (the highest possible ranking). 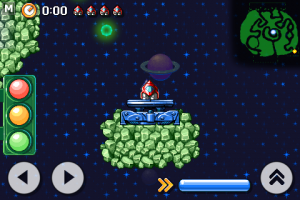 Comet Racer uses a fairly unique leaderboard system that I particularly enjoyed. Instead of setting a separate leaderboard for each level, the game combines all your track times into one total score, where each hundredth of a second that you beat the qualification time by is worth 1 point. For example, if a certain track has a qualification time of 20 seconds, and you finish it in 19.50 seconds, you’ll be awarded with 50 points. Naturally, it’ll only be possible to max out your potential score once you’ve unlocked all the tracks, but the real focus of the game is going back through and improving just marginally on your times in each level. To aid with this visually, the game even keeps a “ghost" version of your best time in each level that you can race against later.

As you unlock more levels, you’ll begin to encounter more and more unique obstacles and pickups that give some needed variety to the tracks. You’ll encounter boost pads, temporary shields, dangrous tracking missles, and walls that must be opened by running over nearby switches. One of my few complaints with the game is that the missiles almost never pose any sort of threat, and will usually be avoided with ease. Even if you fail to avoid the missiles, shield pickups are so common that the useless missiles will bounce right off of you.

I love the way the global leaderboards for this game work, and I will soon start up a major effort to make my way to the top of the boards. Comet Racer is easy to get into and fun to try to master. It’s one of those games that can draw you in for hours at a time for the simple chance to improve your high score, and yet it can be picked up and put down in two minutes, a quality shared by the best of iPhone games.