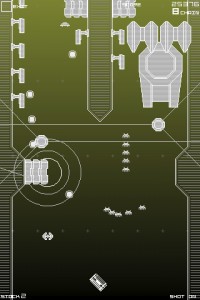 Taito has unleashed a free Lite version of their amazing Space Invaders Infinity Gene game which we reviewed back in July.

We described the game as an amazing effort by Taito to bring a fresh and modern version of Space Invaders to the iPhone. The loads of unlockables, varied gameplay and music-generated levels made it a strong recommendation and gave it a spot in our Best iPhone Games of 2009.

The iPhone version of the game is an expanded version of the Japanese mobile version and walks you down an evolutionary path of shooters starting with a brief glimpse of the original Space Invaders. Each stage adds new capabilities and weapons to your ship and can even unlock additional menu items and options for the game itself.

The Lite version is rather short and does not include the cool ability to create levels based on your music, but gives you a taste of the game.