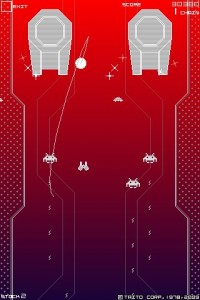 Taito’s Space Invaders Inifinity Gene [$4.99] was finally unleashed into the App Store tonight, and our reaction is simply “Wow!".

The iPhone version of the game is an expanded version of the Japanese mobile version and walks you down an evolutionary path of shooters starting with a brief glimpse of the original Space Invaders. Each stage adds new capabilities and weapons to your ship and can even unlock additional menu items and options for the game itself. It becomes a frantic and incredibly fun experience that has blown away my expectations, and delivers one of the best shooter experiences on the iPhone.

You start off as a simple left/right moving single shooter from the original Space Invaders and gain advanced weapons as well as the ability to move freely around the screen.

The official trailer offers a high quality glimpse of the varied gameplay:

Space Invaders Infinity Gene offers touch screen controls seem perfect, allowing you to touch and hold on any part of the screen to move your ship around. This avoids the problem of obscuring your ship with your finger, and can allow for some precise dodging as seen in my gameplay video below. Meanwhile, the shooting is set to auto-fire.

By unlocking additional capabilities, you add to your evolutionary tree which is depicted as a menu level-select tree. Evolutionary power-ups include advanced weapons such as rapid shot, search laser, wave, lock-on, and gravity. Other unlockables include extra stages, and even extra menu items. For example, the settings menu originally only allows you to have 3 lives per game, but later unlocks allow 5 or even 7 lives (this is as far as I’ve gotten). The extra lives and weapons come in handy in later levels as the difficulty ramps up. The game also comes with “Easy" and “Normal" difficulties, though it wouldn’t surprise me if a “Hard" mode unlocks later on (update: this has been confirmed to happen).

While the official stage count is 38, the possible number of levels to play is essentially infinite. The game includes a unique “Music" menu option that allows you to pick a song from your iPhone/iPod’s library and play a song-specifically generated game level (see video above). This means that when you go back to play using the same song, you’ll get the same level. And if your friend is playing on their iPhone using the identical MP3, he or she will also get the same level. (Note that the levels don’t actually follow the tempo or beat of the songs, but are programatically generated from the song data.)

At this stage, my only suggestion for the game would be a more robust high-score tracking system. While the built-in stages store high score records, the music generated levels don’t seem to.

Space Invaders Infinite Gene is an amazing effort by Taito to bring a fresh and modern version of Space Invaders to the iPhone. The loads of unlockables, varied gameplay and music-generated levels should give this game a long shelf life on your iPhone. If it’s not obvious by now, we highly recommend buying this game.