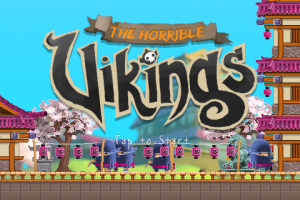 Similar to the amount of care that went in to updating and enhancing the Missile Defense formula in Low Five Games’ other game, Earth Vs Moon, The Horrible Vikings [App Store] is much more than a simple catapult game.

Like other catapult games, the basic premise amounts to aiming and flinging something to fly as far as possible and collide in to other things on the way. In the case of The Horrible Vikings, you control a pair of vikings: One who moves back and forth in the ship as ballast to control the angle of your shot, and by dragging the catapult back with another viking in it you control the power of your shot. While flying you can tilt your phone to control the direction of your flight, swipe down to stomp targets, and later in the game you get access to other abilities to fly farther such as a wizard that zaps you. 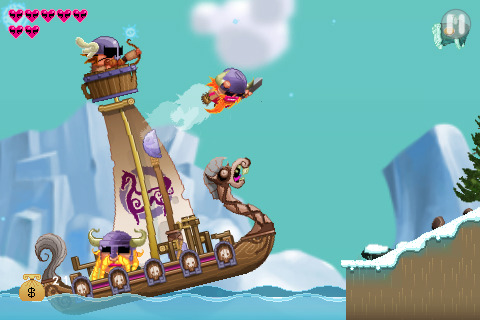 Along the way you pick up coins to spend on items and upgrades, slaughter ninjas, smash jars, and of course– Loot and plunder whatever goal lies at the end of each level. The game is incredibly varied, both in the enemies you come across, the different abilities and upgrades you can buy from the in-game store, and if you’re a fan of OpenFeint achievements, The Horrible Vikings has tons.

One of the nice things about The Horrible Vikings is that you can take as many shots as you want to complete a level. You will never run out of lives, and there doesn’t seem to be any penalty for flinging your vikings over and over. However, if you are precise with your shots, there is also an OpenFeint leaderboard for your “evasion efficiency", or how few shots it takes you to complete the levels. (There is also a leaderboard for most gold collected.)

Low Five Games has a few different videos up on their YouTube channel showing The Horrible Vikings gameplay: