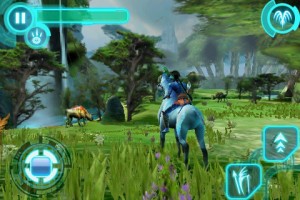 Gameloft’s Avatar was just released last night, and the early adopter response in our forums has been overwhelmingly positive. Avatar is an action adventure game based in the Avatar movie universe.

The game tells the tale of the events leading up to the movie as a sort of prequel to the film itself. Gameloft apparently had complete access to all of the assets behind the movie, as well as recording some original voicework by the cast for use within the game. Avatar appears to use an advanced version of the engine used in Hero of Sparta but with improved visuals and 3GS specific enhancements.

Avatar plays much like a 3D platformer throughout much of its course, but also manages to mix in other play elements. Platform jumping, swinging, climbing and basic fighting are represented throughout the early levels to a much greater degree than Hero of Sparta. Controls include a virtual joystick with on-screen buttons for attack, jump and special attack. Fighting, itself, remains rather shallow and is a matter of rapid fire attacking while maneuvering around enemies (at least on medium difficulty).

Later areas of the game offer a more open world in which you explore while performing quests for villagers, and even a segment where you are playing the back of a banshee avoiding obstacles and taking out enemies. Both these elements are shown in the second video below.

Total playtime is estimated at up to 7 and a half hours across 15 different chapters which is a sizable amount of play time for an iPhone game. One of our writers did run into some troubles with characters getting stuck in parts of the environment requiring a restart as well as some other bugs — though as far as we can tell these issues don’t seem widespread. There are moments where you feel like the camera view or controls aren’t cooperating properly, resulting in difficulties during the platforming portion. Generous checkpoints, however, prevent this from becoming a major issue.

While each of the individual gameplay elements isn’t particularly groundbreaking, Avatar’s major achievement is the sense of immersion and scale that Gameloft has managed to create in an iPhone game. Movie tie-in or not, this seems to be one of the most ambitious iPhone games to date.