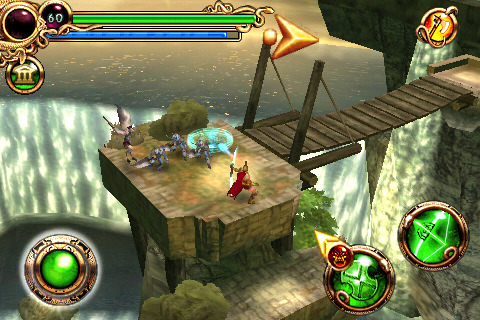 You have to hand it to Gameloft. They have quickly become one of the premiere game developers for the iPhone. Their latest entry into the iPhone game market is Hero of Sparta [App Store] which is best described as a God of War knock-off.

In this $9.99 title, you play King Argos, a Spartan hero, who must battle his way through this epic action-adventure. Your character is controlled in 3rd person perspective with an on-screen analog stick and Block and Attack buttons. The graphics and 3D environment are quite impressive and perhaps amongst the best seen on the iPhone. While I’m normally not a fan of cut-scenes, Gameloft ties the gameplay especially well with their cinematic scenes to add to the grandeur of the experience.

As a “Hack n’ Slash"er, however, the gameplay is not particularly deep, though more involved than my initial impression. While you can get through the game pretty well by just mashing on the buttons as fast as you can, the game does offer 5 different weapons with the ability to upgrade each one a number of times. Each weapon also has a set of defined “combo" moves which are invoked using special button combinations. This adds somewhat to the replay value, which I’ll address later. 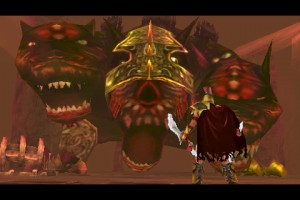 While the plot and cinematics add to the overall atmosphere, they are largely unnecessary to succeed at the actual game. The game is linear throughout with arrows pointing you to the right direction. Your success in each section is measured by your ability to fight-off the latest wave of attackers. While some judicious use of weaponry and special attacks are certainly helpful, in the end, it’s still a matter of repeatedly hitting the attack button.

That being said, the actual act of attacking is a particularly satisfying experience, which I think underscores the appeal of games such as this and God of War. Especially with the bigger/better weapons and twirling combos, there is a certain visceral enjoyment out of slamming the hell out of your opponents. And if that is the ultimate goal and appeal of this game, it succeeds.

To add to that appeal, the game also includes special “finishing moves" that involve tapping buttons in sequence when your opponent is weakened. Unfortunately, our original gameplay video was shot before we were aware of this, so it’s not demonstrated in the embedded video. A forum user, fortunately, posted this YouTube video which shows of the “finishing move" sequence at 1 minute 45 seconds. The exact location of the buttons are different depending on the enemy, and this is reserved for only the certain larger enemies.

Our general gameplay video (without the finishing move):

The game can be completed in about 4-5 hours of play time in Easy mode. Once you complete “Easy" or “Normal" mode, you have the option to play in “Heroic" mode while keeping all your weapons. This nicely adds replay value by allowing you to earn more experience points to upgrade your weapons further and to master each one.

As an overall package, Hero of Sparta is one of the most impressive games for the iPhone. The level complexity, 3D rendering, and cinematics come together to deliver an incredible experience. For fans of the “Hack n’ Slash" genre, this overall production value and the fun to be had is worth the $9.99 despite the somewhat shallow gameplay. However, for those who require more strategy in their games, there may not be enough cross-over appeal.