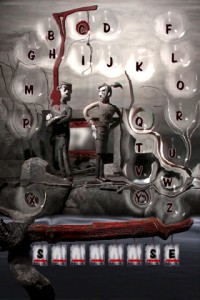 While I was in New York for EA’s Naughty or Nice pre-holiday event, I made sure to swing down to the Freeverse offices to hang out with their crew and Mickey the office cat. At the time they had an extremely elaborate stop motion claymation set wedged firmly between the conference room and the Star Trek: The Next Generation pinball machine for a mysterious game in the works that was only vaguely described as based on hang man.

Hanged [App Store] is the end product of countless hours of black, white, and red stop motion animation merged with the game of hang man, and the results are odd to say the least. You choose letters from droplets on the screen, which then roll to the bottom and the wind either blows the matching letter tile over, or you’re faced with a short claymation clip which get even stranger the more letters you miss.

When a word is completed, it is revealed on a love letter presumably written by the couple you’re attempting to save by solving these simple word puzzles. I’m not sure if I’d call Hanged a good game as much as it just is a curiosity of sorts. There are tons of hang man games on the App Store already, but none as weirdly ornate as this one.

I have a feeling there are going to be two distinct camps of people looking at this game: Those who look at the brief video, screenshots, and complex set used to create this game and truly appreciate it’s bizarre charm… And those who look at those same things and scratch their head.