It’s been a long four months since we first got word that Namco would be bringing Pac-Man Championship Edition to the iPhone, but at long last, it has arrived. 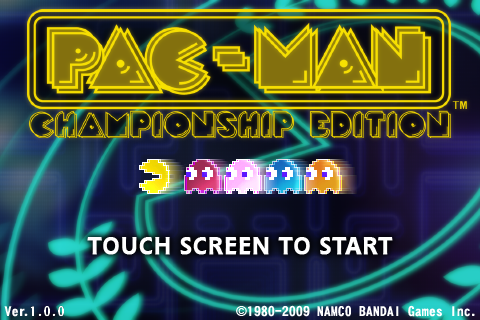 Pac-Man Championship Edition was developed by the original Pac-Man designer Tōru Iwatani and released for the Xbox 360 through the Xbox Live Arcade in mid-2007, to rave reviews. Joystiq called it “the first true sequel to Pac-Man since Mrs. Pac-Man." The Xbox Live version features high-definition graphics, surround sound, and a wonderful future-retro feel that brings to mind Geometry Wars. 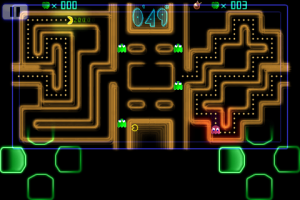 Unlike the original Pac-Man, all mazes and playmodes in Pac-Man C.E. are set against a timer. The goal is to score as many points as possible within the allotted time. But there’s a balance to be struck in order to unlock consecutive levels and move through the game as the game speeds up the better you are doing. For example, I had a hard time moving past the Challenge level of the game because I was gobbling power-pellets and going too aggressively after ghosts early on. My score jumped so high so fast that the action became too fast to handle and I couldn’t actually make it to zero on the clock — and the only way to unlock the next maze is to successfully ride out the timer.

Each maze is basically divided into two halves, left and right. When you eat all the dots on one half, a bonus item (fruit) appears on the opposite side of the maze. Once eaten, the opposite (empty) side of the maze gets re-filled with dots, and so on. To drive the pace of the action, the arrangement of dots laid down upon eating a fruit, as the timer approaches zero, may change. In fact, the actual layout of the maze on a given side may change, as well. 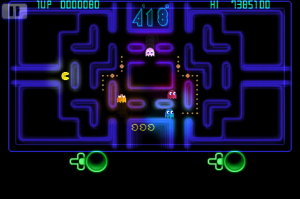 And now for the big question: How are the controls? The iPhone with its multitouch display and accelerometer controls presents a unique opportunity for game developers to bring forth wholly new types of games that would be impossible to deliver on other platforms. That’s the positive, and we’ve seen that in many of the better App Store releases. The negative of the iPhone’s control systems is the lack of a physical D-pad or stick for classic arcade style games of old. Pac-Man and its derivatives are just those types of games. Happily, I can report that Namco has gone to new lengths in providing a variety of control mechanics that allow Pac-Man C.E. to translate very well to the iPhone platform. Pac-Man C.E. offers four (well, really three — but I’ll get to that in a moment) different control options:

Control considerations are a key point in this iPhone adaptation, and I can tell you that all of us here at Touch Arcade are very comfortable with the control options Namco provided in this release and feel that they really could be done no better on the platform and are a non-issue as far as playability is concerned. 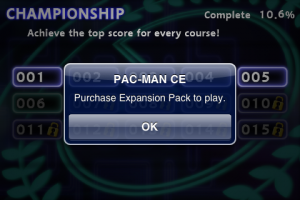 The sequence and selection options — as well as pricing — of the game’s various playmodes differ somewhat from the Xbox 360 release. The Xbox 360 version is available for download in a rather limited, free demo version, with activation of the full game available for $10 USD. The iPhone version of Pac-Man C.E. offers 15 Championship mazes, but only five are available in the base version. As well, only a small subset of the game’s 120 Mission mazes are available for play in the base version and none of the game’s 15 Challenge mazes can be accessed. So what’s all this “base version" business? In order to fully unlock the game, the $3.99 DLC Expansion Pack must be purchased. So is Namco asking you to pay $2.99 for a demo and another four bucks for the full game? Pretty much, yes. Is that a rather poor way to present the iPhone version of Pac-Man C.E.? Pretty much, yes.

That said, is the game worth it? I’d say yes, it is. The iPhone version of Pac-Man C.E. is impressively similar to the excellent original Xbox 360 release. The graphics, though rather scaled down in resolution, are very much on par with the original, and as far as I can tell the audio is taken directly from the Xbox 360 release (though in stereo rather than surround, obviously). Notably absent in the iPhone version, however, is any sort of global high scoring system, so you are left trying to best your own score each time. While Namco seeds the local high score table with presumably attainable goal scores, there isn’t even a system to compete on the same device. That means no names recorded with scores or even a pass-and-play two player mode, which does impact long term playability.

Have a look at our gameplay video that demonstrates all control methods and includes a clip of the Xbox 360 version for comparison:

Overall, Pac-Man Championship Edition actually succeeds in making this brilliant arcade formula seem fresh and new once again. And that’s a truly impressive feat. So, if you can get past the principle of this pay-for-the-rest-of-the-game packaging, it’s really a great game. Namco, however, would have done wonders for their customer satisfaction by just charging the full amount outright than playing the DLC game.