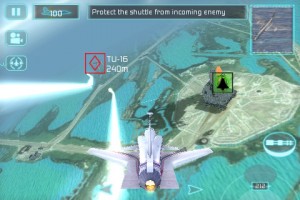 Yet another one of the Gameloft games we previewed in Paris was released this afternoon, Tom Clancy’s H.A.W.X [App Store] is an air combat game that takes place in the somewhat expansive Ghost Recon game universe. Featuring complete voice-overs, 13 missions, 26 planes, and local multiplayer, H.A.W.X. can easily fly with the existing competition on the platform.

Much like Driver, so far the version of H.A.W.X. available on the App Store seems identical to what Gameloft showed us a few weeks ago. 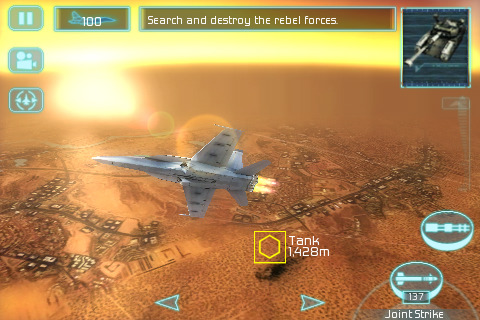 The environments you fly over look amazingly realistic, as Gameloft utilized high resolution satellite imagery to build and texture the environments.

Levels range from Washington DC, to Rio de Janeiro, and even Chicago– And as a native of the Chicago area, it was amazingly cool to fly over Soldier Field, then follow the various highways while dropping bombs. The satellite imagery is detailed enough that if you’re familiar with the locales you’re flying over, you can easily pick out landmarks, streets, and other locations.

Each of the planes comes with their own unique cockpit view along with different strengths and weaknesses. At the start of each level, the game suggests the best plane to use, but you can use any plane on any level– Which can substantially increase the difficulty if you’re dog fighting with a bomber, for instance.

I suppose comparisons between H.A.W.X. and Namco’s recently released Ace Combat Xi (which we already reviewed) are somewhat inevitable, especially with how close to each other the games were released. Here is my take on the games so far:

Both are highly competent aerial combat arcade-style games, and each of them come from popular game series– Although Ace Combat likely has more fans than the Tom Clancy game universe. Actually flying your jet in each game feels great, but H.A.W.X. does fall behind in the HUD department. In Ace Combat, your screen is loaded with various widgets and instruments that at least in opinion really add to the atmosphere of the whole experience. Your screen in H.A.W.X. is fairly barren, and there isn’t even an artificial horizon.

Where H.A.W.X. flips on the afterburners and pulls ahead of Ace Combat is in the included content department. The initial load-out in H.A.W.X. includes twice as many missions and planes, which are all unlocked by playing the game instead of via 99¢ microtransactions (as in Ace Combat). Also, H.A.W.X. has four player local deathmatch and team deathmatch multiplayer.

H.A.W.X. seems to be winning the immediate battle, but there’s something in both games for fans of the genre to enjoy. With so few competent dog fighting games on the App Store, both H.A.W.X. and Ace Combat Xi are worth considering.