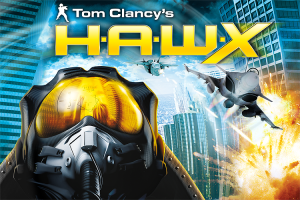 Tom Clancy’s HAWX is Gameloft’s take on the massive Tom Clancy game universe by Ubisoft. Taking place after Ghost Recon 2 for the XBOX 360, HAWX has you flying various fighter jets and bombers to complete objectives in an entirely voiced-over campaign that is packaged with a brand new game engine by Gameloft that has been under development for nearly 8 months now with a full team of 25 developers.

With both tilt and virtual joystick controls, HAWX has a simple interface that should make the game accessible to most gamers. You will initially have 3 planes to choose from, and as you play through the game more will be unlocked for a total of 25 fully licensed planes like the F-14A Tomcat, the F-22, and other popular planes that most gamers familiar with the genre will recognize. 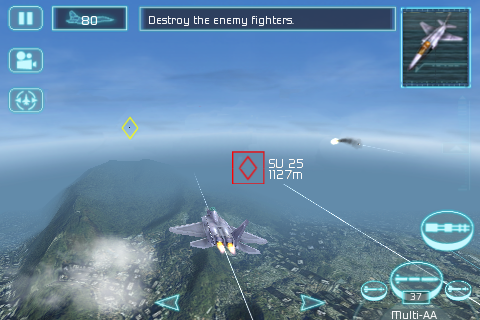 13 missions and locations are included and vary between infiltrating enemy airspace, dog fighting, and bombing. The environments you fly over look amazingly realistic, as Gameloft utilized high resolution satellite imagery to build and texture the environments.

Levels range from Washington DC, to Rio de Janeiro, and even Chicago– And as a native of the Chicago area, it was amazingly cool to fly over Soldier Field, then follow the various highways while dropping bombs. The satellite imagery is detailed enough that if you’re familiar with the locales you’re flying over, you can easily pick out landmarks, streets, and other locations. 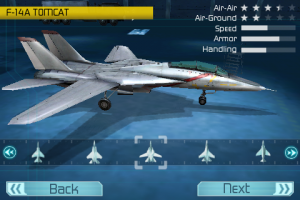 Each of the planes comes with their own unique cockpit view along with different strengths and weaknesses. At the start of each level, the game suggests the best plane to use, but you can use any plane on any level– Which can substantially increase the difficulty if you’re dog fighting with a bomber, for instance. Also included is local multiplayer both over Bluetooth and WiFi with a maximum of four players to compete in either a deathmatch or team deathmatch.

The graphics of HAWX were impressive, and everything from the environments to the plane models themselves look absolutely phenomenal. Each level also takes place during different times of day, so there is a wide range of lighting effects that change depending on when the mission is taking place– And as with all Gameloft games, HAWX will run on every iPhone and iPod Touch model.

HAWX is due to be submitted soon, and ideally will be released before the end of the year. While Gameloft was reluctant about talking about their plans for the future, they never seem to use a game engine they develop only once. Because of this, it isn’t very far fetched to suspect that Gameloft could have plans to release even more flying games in the not too distant future.