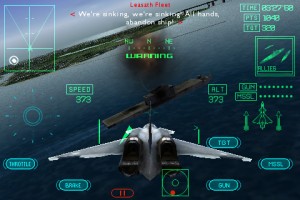 As promised, we’re back with a review of Ace Combat Xi Skies of Incursion [App Store], the latest in Namco’s Ace Combat flight action game series that has seen numerous sequels that take place all over the

There are a lot of things I like about this game. The plane models themselves are great, and the ground is covered with real satellite imagery which greatly adds to the realistic look of the game compared to many other titles that just use plain green and brown textures that vaguely resemble grass and dirt. I’ve found the tilt controls to work very well, and the various on-screen buttons that make up your weaponry and throttle controls to be easy to use. 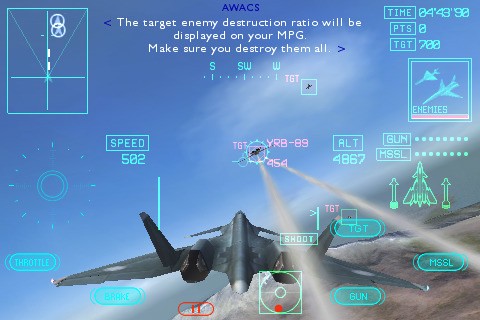 Everything about the flight system itself in the game is phenomenal, and you can tell that they’ve drawn from the years of experience in making the Ace Combat games. There are two views, a first person cockpit view and a third person chase camera. I’ve found myself preferring the cockpit view, only because the additional interface elements look really cool– Although it does seem much easier to get disoriented. There is a shell here for a really great game, but it quickly goes pear shaped as soon as the “wow" factor of the game wears off about half way through the first level.

The missions in the game involve listening to radio chatter for enemy jets to be called out, orienting your jet towards them, hitting the throttle, and taking them down either with your machine gun or missiles. There isn’t anything really wrong with this, because flying around in the game is a lot of fun, the problem is the only difficulty in the game comes from each level’s timer. 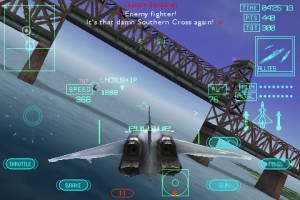 I often found myself playing the game, and having a great time flying around shooting down the other planes only to abruptly have my play session end by hitting the time limit– Even though it felt like I was doing well, and engaging in some pretty impressive dogfighting maneuvers. Shooting down all of the enemy jets within the time limit can be frustratingly difficult, and require multiple attempts on each level, especially if you end up getting disoriented and wasting too much time getting your jet pointing in the right direction to take out the next squadron of fighters.

On top of this, there are only five levels included in the game. I don’t think it’s very likely you can breeze through the game in one-shot without needing to redo any levels, but if you can it will only take around a half hour to complete. More realistically, you can expect 1-2 hours of gameplay depending on your skill. There aren’t any special missions or boss fights, and very little changes throughout the entire game. 10 jets are available, 3 from the start, 2 to unlock, and 5 via a 99¢ microtransaction for each plane.

Ace Combat Xi reminds me a lot of Command & Conquer Red Alert in that there is a framework for an absolutely amazing game here, but instead it is being used as a vessel for DLC sales. If you’re in love with the Ace Combat series and don’t mind a rather short campaign, then you may enjoy having a copy of the game with you at all times on your phone. If you don’t have any particular ties to Ace Combat games, you’re probably better off exploring the few other aerial combat games or waiting to see how Gameloft’s HAWX turns out.