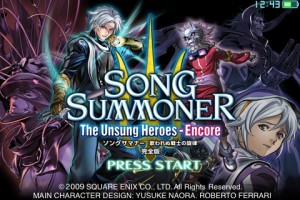 Song Summoner Encore [App Store] is Square Enix’s second release in as many weeks, following on the heels of Hills and Rivers Remain which we weren’t overly impressed by. Fortunately, Song Summoner Encore has a bit more substance to its gameplay, touting an interesting twist that sees your music library integrated into the game as its major drawcard.

Song Summoner Encore was originally released as an iPod app utilising the click wheel control. It is a typical turn-based RPG in the same vein as Final Fantasy Tactics, where each battle sees you taking turns to face off against a number of foes with a limited number of your own troops. The iPhone version of the game carries over 20 hours of gameplay and represents both the content of the original Song Summoner as well as a never-published iPod sequel Song Summoner 2.

Song Summoner distinguishes itself by offering a meta game of sorts by integrating and keeping track of your favourite music. Song Summoner Encore automatically generates your troopers from songs in the library that you select; giving each song a class, stats and in-game likeness. The game presents music as a force to be reckoned with as part of the storyline, but continues this out-of-game too by remembering your iPod play counts for each song/trooper that you select. The more you listen to your chosen songs, the more you are awarded with moral boosts that strengthen your troopers in battle.

It is a novel idea that unfortunately is not as fleshed out as it could be. Other than the system outlined above, the songs you select play no further part in the game itself, making the entire integration feel more than a little lacklustre. 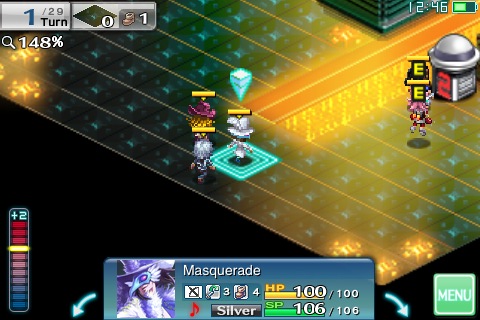 This continues through to the presentation of the game itself. The graphics in Song Summoner Encore are nothing to write home about, the only exception being the excellent cutscene artwork. When fully zoomed out, the in-game graphics look decent, and the animations and spell effects are respectable. As soon as you zoom in however, each pixel stands out in what can only be described as an eye sore. Unfortunately, the game cannot practicably be played at the prettier zoomed out level; as navigating the battlefield becomes hit and miss at this setting, particularly for those with larger fingers. Of course, the reason for this seems due to the fact that the game content was originally designed for the click-wheel iPods. 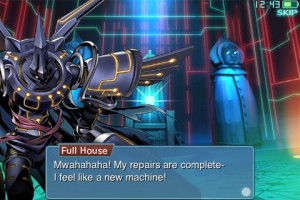 The controls in Song Summoner Encore have been adapted well from the click wheel. Each action is managed from an in-game scroll wheel with a considerate confirmation prompt ensuring that no order is given accidentally. Character and option menus are easy to navigate with the touch controls, and an automatic and manual save system minimizes frustration.

Each level consists of managing your army either by choosing existing forces or importing new units from your iPod library, then pitting those units against the various enemies that make up each level. From there Song Summoner is a standard turn-based strategy game where you kill all of the opposing forces before they kill your force, progress to the next level, and repeat.

Those new to the game however, will undoubtedly find mind boggling the sheer magnitude of stats and game mechanics to keep track of in Song Summoner Encore; something not alleviated by the less-than-helpful in-game assistance. For example, the effectiveness of each trooper in battle requires consideration of deployment points, play points, class ratings, rankings and morale levels.

Song Summoner Encore is ultimately a game that will only reward those with patience enough to learn its details. For those looking for a casual experience, Song Summoner Encore is difficult to recommend, even considering its unique iPod integration. Fortunately, a lite version is available for download and highly recommended for those remotely interested in the game or have been looking for a tactics game to really sink their teeth into.