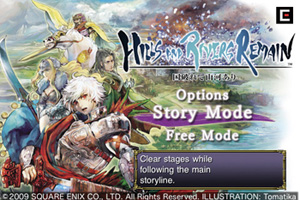 Square Enix appears to be dipping its toes into the App Store once again, releasing another title with little fanfare, Hills and Rivers Remain [App Store]. Square Enix has released a light strategy game that is best be described as a Galcon-a-like. Fortunately, it does do enough different that it can be distinguished on its own merits, though it continues to disappoint that a developer of Square Enix’s calibre could not bring something to the table that really redefines the platform.

Hills and Rivers Remain wraps the traditional Galcon model in a typical Japanese RPG wrapper, with grandiose story telling, an abundance of dialogue and the typically overly dramatic anime characters that have been a hallmark of Square Enix’s franchises. Unfortunately the story in Hills and Rivers Remain isn’t its shining point, being loaded to the brim with clichés, uninspired characters, and banter that will likely make one wince more often than not.

The gameplay itself sees you directing your forces around a grid of linked bases, reinforcing the troops at each base and sending them on their way to overwhelm and capture the enemies’ bases. Your troop numbers are replenished only when the constantly circulating green frame around the screen depletes, and only at a HQ that you can designate by pressing on an existing base. This summarizes much of the gameplay; frantically selecting the appropriate base to reinforce depending on the enemies’ moves and your own strategy, a fact that is compounded when you are faced with more than one enemy. 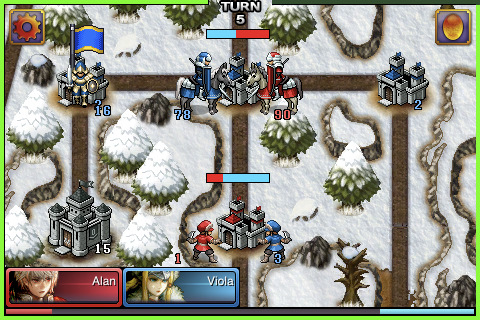 Where Square Enix has departed from the Galcon mold is in its inclusion of ‘special bases’ and consumable items. Special bases come in the form of stables, castles, ports, cannons, mines and forts; each providing a specific tactical advantage such as faster movement, being able to travel over sea or increased combat effectiveness, to name a few. This feature is its saving grace; providing interesting strategic choke-points that grant bonus’ that essentially determine each match. Additionally, upon seizing a base you are sometimes awarded with an item, which can be consumed at any time to boost a particular aspect of your entire army, such as speed, combat effectiveness or defense. Both these elements help Hills and Rivers Remain from becoming an overly monotonous experience. 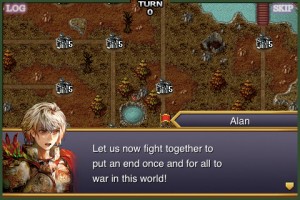 Fortunately, the artwork and sound in Hills and Rivers Remain is of the high standard expected of Square Enix. The game itself is presented in the form of detailed 2D sprites of sufficient resolution that they can be zoomed in on without looking ugly. The animations themselves are a little basic, but ultimately they get the job done. The in-game dialogue between the game’s characters is where the artwork comes into its own; each character splendidly created in typical Square Enix fashion. The music follows suit with Square Enix’s penchant for fanfare, symphony and drum-rolls.

Despite all this however, one can not help but feel that you are still playing Galcon albeit in a different setting and without the multiplayer experience that made Galcon a hit. Longevity in Hills and Rivers Remain comes in the form of Free Mode, where a range of different armies unlocked in Story Mode, each with their own strengths and weaknesses, can be pitted against each other in the various story missions.

For those who are fans of troop management games, Hills and Rivers Remain may just provide enough additional gameplay elements and depth to really pique your interest. For those expecting a more comprehensive experience or those who did not enjoy games such as Galcon, the gameplay can get quickly tiresome and stale. The story is unfortunately forgettable, and raises the question of why Square Enix did not tap into its sizable library of popular licences to provide something more of substance. A lite version is available with exclusive content not found in the full version, so is worth a download regardless of your plans to buy the full.