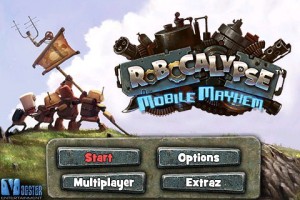 Vogster Entertainment’s Robocalypse delivers a military strategy game wrapped up in a Saturday morning cartoon. Ported from the Nintendo DS, Robocalypse takes advantage of the touch controls on the iPhone/iPod Touch platform to provide a humorous and engaging experience. While the production values are obvious from the gameplay screen shots, what is really done well is the story and how it’s presented. In Robocalypse, you must defend the world from the evil Demolisher robot and his army of henchmen with your own army of robots.

The big attraction of Robocalypse for many will undoubtedly be the visuals which are well-animated with a good dose of self-deprecating humor. From the robots and structures to the explosions and weapons fire, this is a good looking game. Dialogue bubbles appear throughout where characters spew humorous one-liners, and coupled with the funny cut scenes, you’re bound to chuckle here and there. From an audio standpoint, the game sports occasional voiceovers accentuated by a workmanlike soundtrack. 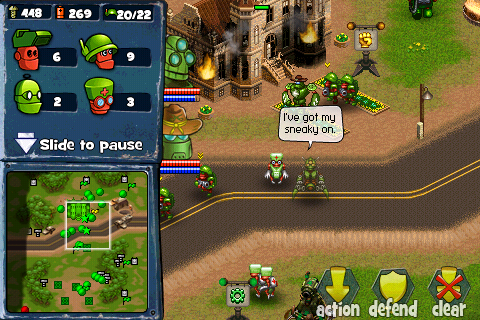 The interface can look a little strange since the HUD takes up a third of your screen space, though the information provided is more than necessary. The game will automatically orient itself to landscape and portrait modes, and you can swipe the HUD to bring up primary and secondary mission objectives. The primary ones are necessary to complete the mission while the secondary ones provide additional energy and resource boosts.

In the upper left corner is the mini-map showing your location as well as the location of bots. Unexplored areas are blackened out, but you can easily maneuver around through by dragging within the mini-map or in the actual game area. And a graphical summary shows the number and types of bots in the field at any given time as well as available scrap metal and battery power. The status of heroes is located down the left side of the screen and tapping on them will instantly locate them. 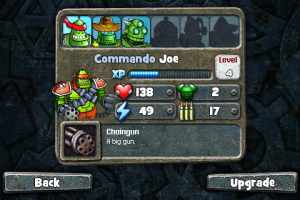 The game has a considerable amount of depth with 17 campaign missions and three modes of difficulty—easy, normal and hard. It also includes local Wi-Fi multiplayer and a beta of online multiplayer with 18 multiplayer maps. The single player missions themselves are quite varied in their objectives that can be as straightforward as destroying the enemy’s headquarters and as complex as preventing a certain number or enemy bots from entering an area while also destroying specific structures. We had not tested the multi-player options for this review, although reports indicate that the online multi-player community has already started ramping up.

Before building your armies, know that scrap metal is the foundational resource to accomplish that, which means you’ll need an infrastructure in place. First and foremost is the construction of buildings since this is essential for building up troops and heroes for offensive attacks.

As with typical RTS games, there are heroes who bring a little something extra to the warfare table. Robocalypse doesn’t disappoint with 6 unique heroes along with 20 weapons. 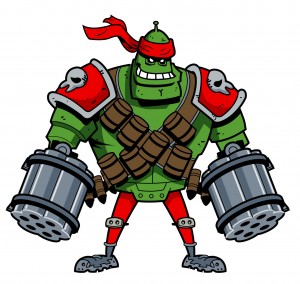 The game also includes RPG elements where the heroes abilities can be customized. Through victories and enemy kills, heroes level up and life points can be applied in the areas of toughness, energy, armor and weapons. These are earned through kills and can be used to boost their weapons in between missions. And what would heroes be without an army of robots… the game has four basic bots (Builder, Soldier, Medic, Heavy Soldier), each essential if you’re to succeed.

A slight learning curve comes with the controls especially in terms of managing bot movements. An individual bot can be moved by first tapping on him, and then the desired location, but moving groups can be a unorthodox. In general, bots roam around and behave on their own such as scouting areas, repairing structures or even battling enemies. Two buttons appear at the bottom of the screen: Action and Defense. Action enables you to set a spot where you want as many as 5 troops to move as a team. Defense is used when you want a certain location defended at all costs. You tap on the appropriate button and then tap on the location. The action flags serve as destination points and troops will move into the area where the flag is located. When placed in enemy territory, they will attack. The action flag system isn’t the most intuitive and can be frustrating since troops will occasionally wander off and get killed, but in general, the AI seems to work well with the system.

The action can be intense and rather addicting. The game seems to have a balanced AI with a fair share of attacks on your camp thrown in for good measure. Exploration is also encouraged since secret upgrades are hidden throughout. Specific controls points are located throughout both for your side and that of the enemy. These locations can be captured and in some cases, unlock hidden mission objectives.

Overall, Robocalypse brings a refreshing take to the iPhone RTS category. While the action flag system takes some practice mixed in with a bit of frustration, Robocalypse is an entertaining and humorous game that any strategy gamer should check out. The inclusion of multiple difficulty levels (easy, medium, hard) as well as online multiplayer should also give the game plenty of long term play.