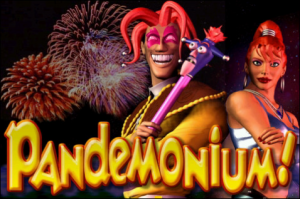 Originally published by Crystal Dynamics, Pandemonium is a run, jump, shoot, and stomp platformer that is best described as “2.5D", in that, while the graphics are fully 3D rendered, gameplay takes place along a 2D plane.  It feels something akin to (the more notable titles) Crash Bandicoot meets NiGHTS Into Dreams.

The game stars Nikki, a young sorceress in training, her court jester friend Fargus, and his puppet Sid.  One night at a wizards’ training seminar, they get hold of the Anicent Wizards Spellbook and Nikki starts casting spells atop Lancelot’s Castle.  It’s all fun and games until she unwisely attempts a 10th level spell and summons a frightful beast known as Yungo who proceeds to consume the entire village in a single gulp.  Stricken, the lot sets off for the Wishing Engine in an attempt to save the village and undo the damage they’d wrought. 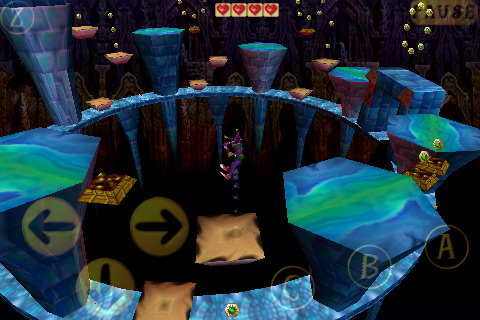 Gameplay involves running amongst the twisty paths and platforms of 18 different worlds (each with a number of levels) in an attempt to save the village.  Along the way there are treasures, weapons, and health power-ups to collect while dodging, stomping, and shooting a host of beastly enemies, including spiders, poison plants, dragons, and goons.  At the start of each level, the player can choose between Nikki and Fargus.  While Fargus has a cartwheel-attack skill, acrobatic Nikki can perform double jumps so useful in reaching far-away platforms. 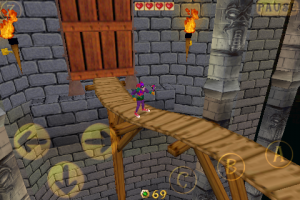 I first encountered the game as a pack-in title that came with a 3Dfx Voodoo video card for the PC, back in 1998.  It was an impressive demonstration of the video hardware of the day and, at the time, was fairly well reviewed by critics.  Pandemonium! for the iPhone is closer to the Windows version of the game, which features perspective correct texture mapping and an overall cleaner look than the console versions.  And while the graphics break no new ground today, they hold up rather well and actually seem best suited for a mobile device rather than a big screen, given the relatively simple textures used in the rendering.

I’ve tried Pandemonium! on both an iPhone 3G and a 2G iPod touch and have noted that, while the animation is quite smooth on the touch, the game does exhibit occasional framerate dips on the iPhone 3G.  Another mild criticism I might make concerns the simple sound effects and fairly monotonous in-game music — they could have done with a bit of an overhaul. 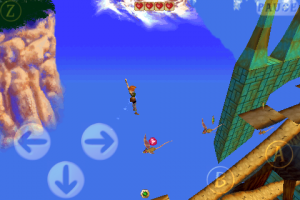 The game utilizes an on-screen D-pad and button touch controls for movement, jumping, and firing.  As is often the case with such arrangements on ported titles, the controls can be cumbersome.  It’s easy to lose track of where your fingers are while attempting some of the complex acrobatics required to get from platform to platform.  The longer I played, however, the more comfortable I became with the controls.

While it’s obviously not a game built with the iPhone’s unique attributes in mind, I’m glad to see it ported to the platform.  In evaluating Pandemonium! for this post, I found it a hard game to put down — some of that owing to nostalgia, of course, but it’s actually a fun game to play.  I think those who can get behind the 2.5D play mechanic and don’t mind D-pad controls, even without previous familiarity with the game, may find Pandemonium! to be a charming platform experience.

See our gameplay video (taken on a 2G iPod touch) for a look at the first few worlds.

The game is being discussed in a forum thread where many familiar with the original are excited about the iPhone port.

PC users can download a somewhat aged demo of the game to try before buying (verified it runs on XP on down, not sure about Vista).