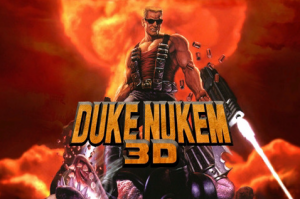 Duke Nukem 3D [link], which jumped on our radar early last month, has finally appeared in the App Store.  3D Realms’ highly popular 1996 first-person shooter has been ported to the iPhone by MachineWorks Northwest.

The game starts out in  21st century Los Angeles.  You control Duke, who is on a mission to thwart the efforts of an evil alien race bent on stealing all of Earth’s women.  Later missions are set in military installations, moon bases, deserts, space stations, flooded cities, and Japanese villas.  The PC original was very highly rated, but controversial, due to the claims that it promotes pornography and murder.  GameSpot, who gave Duke Nukem 3D an 8.8 (“Great") out of 10, wrote:

Based on the hackneyed first-person Doom formula, Duke Nukem 3D is the first 3D shoot-em-up to offer the player more. There are more diverse environments, more devastating weapons, and greatly improved playability. Unlike the fantastical dungeons and lava pits found in Doom and its kindred, the atmosphere in Duke Nukem is more tangible. The story revolves loosely around a “Mars needs women" theme, involving aliens and their abduction of scantily-clad women. As Duke, you explore everything from an alien mothership to metropolitan underbellies, including smut shops, skin flicks, strip bars, and the horror of horrors: karaoke bars. The levels are massive and, even on the easiest difficulty setting, provide a formidable challenge.

As an avid PC gamer at the time of its release, I recall a distinct rivalry between the DOOM vs. Duke 3D faithful.  It’s a game that definitely made its mark and started off the chaotic effort that is (or was) Duke Nukem Forever. 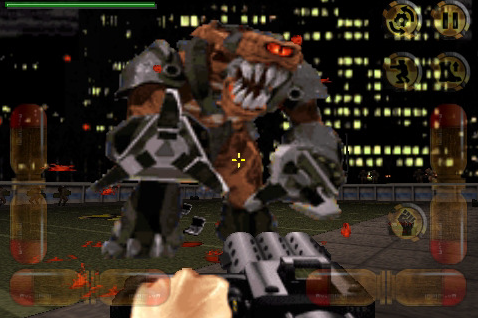 In our limited time with the game so far, the iPhone version appears to be a rather full implementation of the the PC original, and runs quite smoothly on our 2G iPod touch test unit.  But not all is well in the world of Duke 3D on the iPhone…

The game features both analog and digital on-screen control sticks, modeled after those from Prey.  Unfortunately, in this initial release, the analog controls are not working correctly.  (See video.)  The (left) movement stick cannot be used as as stick (by dragging), but must be used by tapping to allow any sort of coherent control.  The digital sticks (pictured above) work as they do in Prey, but feel fairly awkward to us, though if you’re comfortable with Prey‘s digital controls, then you should be fine here.

Happily, George Broussard, co-author of the original game, addressed the situation in our forums and indicates that an update will soon be released that sets things right with the controls.

Until the control update arrives, iPhone gamers may want to consider the current release to be a bit of a trial.  Controls are key and while there are some workarounds (see update below), the default control for Duke Nukem 3D on the iPhone just isn’t there yet.  The game is currently available at a launch-day special price of $2.99 [App Store].

Update: Another workaround that works pretty well for the analog controls was posted to our forums: Choose Analog Controls, Disable Strafe. Then use the left Analog Pad for forward and backward movement only (again, you must tap, not drag your finger). And use the right Analog Pad for direction.