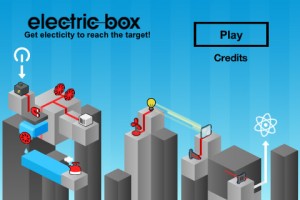 Candystand.com was launched all the way back in 1997 as the very first advertisement-oriented flash gaming portal on the internet and since then they’ve been consistently pumping out high quality free browser-based games. Their current #1 flash game, Electric Box [App Store] recently made the jump from the browser to the iPhone and provides a nearly identical gameplay experience to the original.

The premise of the game couldn’t be more simple, all you have to do is get the power from the source to the target and included is a vast array of different objects that make up the pieces of the puzzle for each level. For instance, to bridge the gap between the source and the target in the first level you need to place a light bulb on the wire coming off the source, and solar panel on the wire coming from the target. The difficulty of the game rapidly ramps up, and pretty soon you need to be managing different solar, laser, steam, and wind power transmitters and receivers. 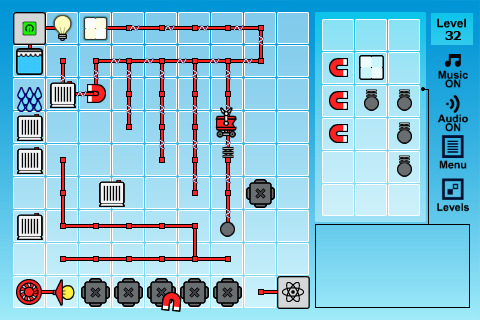 The one thing that would be really nice to have in Electric Box is some kind of hint system. The solutions for each level are available online, but I’d rather just get a nudge in the right direction instead of having the whole puzzle spoiled. I enjoy difficult puzzle games, and a few of the higher levels have left me stumped for quite some time before having some massive epiphany as I realize how it all goes together, but I’m not sure everyone has this same preference. 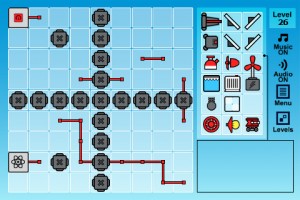 While there is no lite version, the game is fully playable in a browser on Candystand.com featuring the first 15 levels (compared to the 50 found in the iPhone game) and the ability to create, share, and play user-created levels.

I’ve been having a great time with Electric Box, and could easily see myself playing through all the included levels, provided I don’t hit some massive brick wall and find myself eternally baffled with a puzzle. I recommend trying the flash game if nothing else, if you find yourself enjoying it, pick up Electric Box for the iPhone to play the same great game on the go.

It would be really cool in the future to be able to have the same user-created level functionality in the iPhone version, but either way, for a buck, you can’t really go wrong.