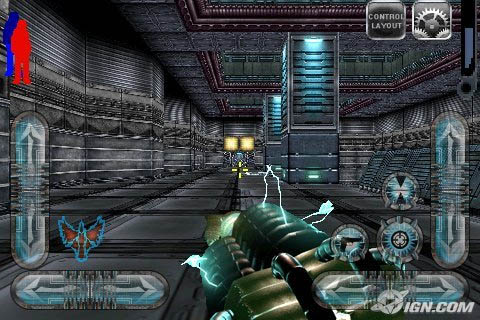 IGN has the scoop on an upcoming first-person shooter Prey based on the Xbox 360 and PC game.

Prey follows the early exploits of Tommy, determined to rescue his girl Jenny from the clutches of an alien horde. At the start of the game, Tommy wakes from a terrible crash. He’s in a canyon decorated with ancient carvings. Strange monsters are afoot. All he has to defend himself with is a wrench, but that’s certainly good enough to crack a few alien skulls before locating more powerful weapons, like energy guns and an organic grenade that it kind of like a frog. To pull the pin, you rip off one of its wriggling legs.

The iPhone version of the game is said to introduce an “innovative touch controls scheme" meant to replicate a console controller.

The screenshot above reveals the use of on-screen bars to control movement while “looking" is accomplished with your thumbs. According to the early reviewer’s experience, he quickly became accustomed to the bars which can be configured anywhere on the screen.

The game is expected to debut in the next few weeks. Is this finally the First Person Shooter we’ve been waiting for?