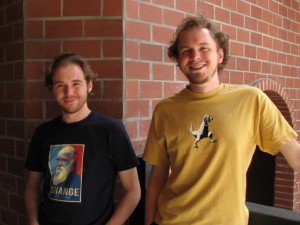 TouchArcade was given the opportunity to speak with Adam Mechtley (pictured in yellow shirt to right) who is one of the developers responsible for the upcoming Touch KO boxing game for the iPhone and iPod Touch.

Adam provides some background on the game, details the game’s features and controls, and provides some new screenshots in this exclusive interview.

Touch KO is a Fight Night inspired boxing game that was announced at GDC this year. It will be published by Chillingo.

TouchArcade: Tell us a little about yourselves. What is your history?

Adam: Matt (pictured in black shirt) and I both work full-time for Flashbang Studios in Tempe, Arizona. We have done a couple of iPhone games (iSplume, Rebolt, Raptor Copter), but our focus is primarily on web games for our portal, blurst.com. These web games include Off-Road Velociraptor Safari and Minotaur China Shop, among others (we do a new game every 8 weeks).

Prior to Flashbang, I had been working in the games industry on console products for several years. I worked as a technical artist for THQ, doing art and programming for a real-time muscle deformation system on an action sports title, and worked on Baja: Edge of Control for 2XL Games. Matt worked on an astrophysics simulation using data from the Hubble Space Telescope before he joined Flashbang. 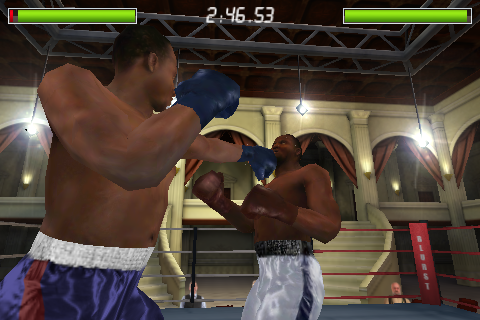 Q: When and how did you start Touch KO?

Adam: I started Touch KO at a game jam right after the Unity conference in October last year. Unity (our middleware) had just added iPhone support, so I wanted to try it out. I wanted to do something with realistic character animation, and felt like a boxing game would be a good bet, given my previous experience. 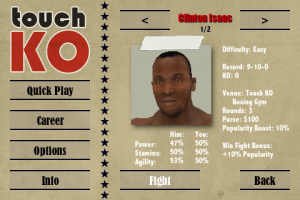 By the end of the weekend in Copenhagen I had a boxer with a control system and an animation system that let me control different parts of the body using the touch-screen and accelerometer. The game stayed on ice a couple months my wife and I got caught up in the holiday rush.

In January I picked the game back up in my free time to see how far I could take it. I added some motion capture animation, textures, an environment, and it was shaping up to be a great-looking game so I wanted to take it all the way to completion. My brother, Matt, jumped on to help with some additional programming (like AI) since he had a lot of fun working on our last iPhone game, Rebolt.

Q: What was the inspiration behind the game? Any particular titles?

Adam: We’ve drawn a lot of inspiration from Fight Night in particular — it really captures the strategic aspects of boxing. We’ve also tried to incorporate some of the faster arcade-style action of games like Punch-Out and some of the boxing games on the phone. 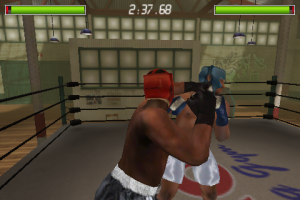 We’ve found, though, that it’s no longer enough to just have a fun game. With all of the apps out there, it’s important how you promote your games to make sure players can find them. So we got in touch with the guys at Chillingo through a friend. They’ve had some success recently promoting titles for the iPhone and they’ve been great people, so it was a good match.

Q: How far does the realism run? Does a wounded eye obscure the game screen, for instance? Any other more subtle touches?

Adam: Actually that is one of the things we are testing!

In terms of content, we are pushing a lot of detail. Each character is about 3500 polygons and uses actual motion-captured animation. We also have some nice gameplay features to add detail. For instance, we modulate the fighters’ speeds based on their stats, so a fighter with high agility has a higher base attack speed. The fighters become tired and attack slower if they throw too many punches or the fight drags on too long, so they become more vulnerable to counter-attacks. On the other hand, you can mitigate this by training up stamina. 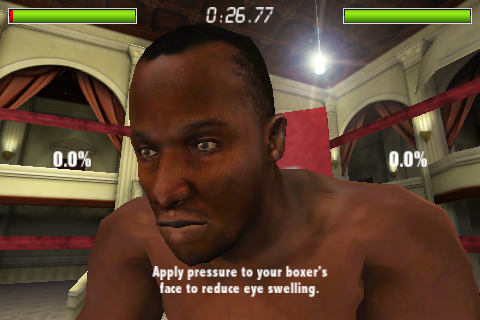 This way players can think about strategy leading up to a fight as well as during the match: you can either conserve your energy to fight the long bout, or pummel your opponent with a barrage, hoping for an early KO.

Q: How is career mode handled? How many different opponents? Venues?

Adam: We’re randomly generating tougher and tougher opponents for you as you raise through the ranks in career mode — the number of possibilities is pretty staggering. The actual number you’ll fight from amateur up to winning the final title fight will depend upon the player’s skill and career choices. 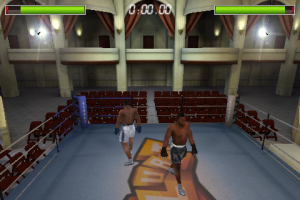 You progress by accumulating popularity, which you gain each fight along with some cash, but different fights give you bonuses for winning. Each time you choose a new fight, you are given a few options of different contracts to sign. Some fights let you earn money faster to upgrade equipment, while other fights can help you accrue popularity and move forward in the game faster.

Once you have earned enough popularity, you get a shot at challenging the champ in your current tier to win his title and move into the next tier. You also get a change of scenery and soundtrack as you move along.

Q: How is the game controlled? Any use of the accelerometer?

Adam: Fundamentally, you’re controlling your boxer’s left and right hands with your left and right thumbs. Taps, swipes, and holds will result in jabs, hooks, uppercuts, blocks, and the like.

Everyone who has played the game so far has found it pretty intuitive. We use the accelerometer for dodging — it’s a more advanced skill, but it’s definitely satisfying to have your opponent miss entirely as you duck and bob out of the way!

Q: Have you licensed any actual boxers in game or are the players ficticious? 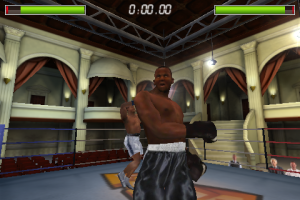 Adam: Actual fighters is something that is definitely in the long term plan of this game! it is a long process to secure rights for celebrity endorsements of characters, let’s just say it’s a good thing we’re working with Chillingo! Our character creator has lots of options, though, so players ought to be able to come up with a fighter they’re happy with, whether he’s an approximation of their favorite real boxer or their (giant, muscular) uncle.

We have plans for updates after release to add more fighters and envrionments, so players should keep their eyes peeled for special announcements and opportunities and of course comment on websites where we can see what they would like. We really want players to “get in the game" so to speak…

A: We’d love to do multiplayer as a future free update — especially after iPhone OS 3.0 is released and we can use the announced multiplayer over Bluetooth capability. For now, though, we’re focusing on the single-player game. We have a full-on career mode where you’re rising through the ranks earning fame and cash, and a quickplay mode for folks that just want a quick bout while they wait for the bus. We will launch the game with online leaderboards, which we’ll rank by your career’s all-time record, as well as achievement tracking (similar to blurst.com). 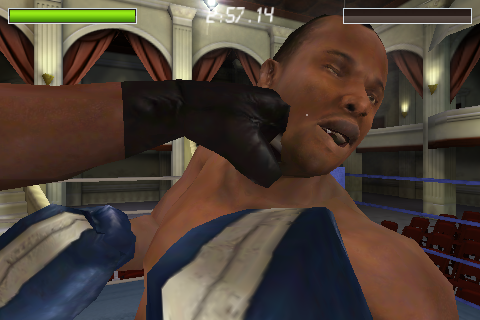 Q: When will the game be coming out? Price?

Adam: Our number one priority is having a top quality game, so we want to release it when it is ready. That being said, if we take Apple’s approval process into account, it is looking like it is on track for a release sometime in June.

We are not officially announcing a price point yet, but we are looking in the middle range. What I will say is that we ourselves are gamers and know how important it is to feel like you actually get your money’s worth when you pay for a product. It is the developers’ obligation to make sure that when they ask players to pay, they deliver an experience of commensurate value. On the plus side, because we are only two people, we don’t have to charge quite as much to get a return on our investment.

TouchArcade: Thanks Adam for providing additional details about Touch KO.

Here is a gameplay video that was previously released that shows off the features:

We’ll be providing a much closer look at the game once it comes out and keep tabs on its progress over the next few weeks.