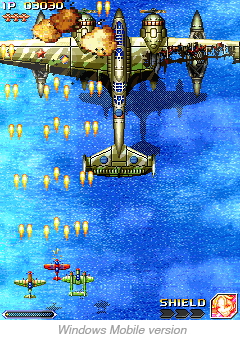 Yesterday we posted a preview of Gameloft’s upcoming Terminator Salvation for the iPhone and iPod touch.  As mentioned in that post, we also took a look at another upcoming title during our visit to the studio’s Manhattan offices, yesterday.  Siberian Strike is a top-down airplane shooter, visually reminiscent of 1942, that is set to go live in the App Store in two weeks’ time.

Siberian Strike, originally a well-reviewed mobile game, follows the fairly standard top-down, 2D shooter formula, but is notable on the iPhone for its fast-paced onscreen action (even as demonstrated on a first-gen iPod touch, the slowest device in the family), a trait so commonly absent from shooters in the App Store.

But the best part of the game is surely the backstory…

After the Second World War ended, the Soviets are perfecting a strategy of global communist invasion using a mysterious vodka export company… This disturbing company, “Stalinka Corp," is led by the Evil Stalinbot, a genetic crossbreed between Stalin and the future Mir space Station…

The Evil Stalinbot will use his terrible weapon…Bottles of Stalinka!!!! This fiendish vodka is capable of corrupting all the decent – honest workers in the free nations!!! To thwart Stalinbot’s plans, the Air Strike command mobilizes its 3 best fighters: Eliza McCampbell, Eliot Freeman, and Pappy T. Wilder

In Siberian Strike, the player pilots one of three different aircraft: R-51 Thunder, P-69 Conquest, or B-87 Sicarius.  Gameplay involves dodging enemy fire and laying waste to the waves of enemy aircraft that dance across the screen, and the boss aircraft at the end of each level. The destruction of certain enemies releases power-ups than can be picked up to enhance weapons and summon wingman reinforcements. The game utilizes touch control of the aircraft (which can be moved in all directions), with a continuous auto-fire, as long as a finger is held to the screen.

The game will feature WiFi-based multiplayer game sessions as well as an online leaderboard for ranking against players across the world.

While I only spent a short while with the game, the overall flow of the onscreen action makes for a great shooter experience with a real arcade feel.  Siberian Strike is easily one of the best shooters for the iPhone, and fans of the genre are in for a real treat when it hits the App Store.

Have a look at a somewhat crude video we captured of Siberian Strike X, a Windows adaptation of the game, which is quite similar to the iPhone version in overall gameplay and gives a feel for what’s to come.

Gameloft has posted the iPhone version’s intro movie, but it doesn’t show gameplay.