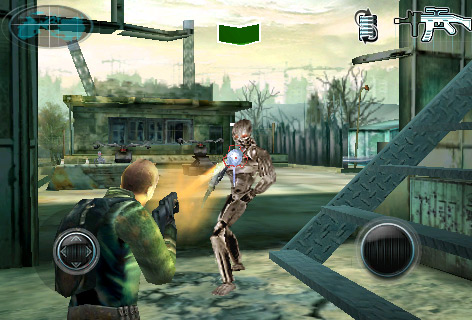 The most significant of the two is upcoming Terminator Salvation, a third-person shooter to be released in time for the May 27th release of the film by the same name.  (More on the other title, shortly.) 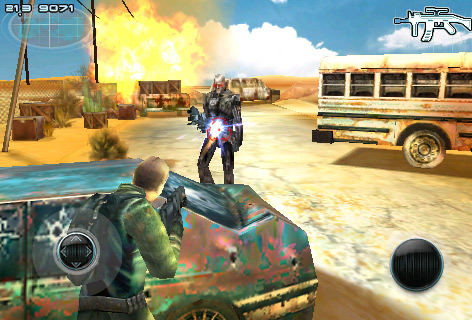 In Terminator Salvation, the player assumes the role of both star John Connor and Marcus Wright, a terminator who believes himself to be human, depending on the stage in question.  The game closely follows the movie, but features certain enemy machines that are exclusive to the iPhone game.

Gameplay involves moving through various indoor and outdoor levels, following a cue arrow and destroying all enemies that get in the way.  At the beginning of each level, the player is presented with a  briefing, detailing the enemies within, including their individual points of vulnerability (head, torso, legs, etc.).  While most of the gameplay is on-foot, certain levels involve driving an armed vehicle and manning the on-board cannon.  The main game utilizes touch controls–virtual left thumb stick for motion, screen swipes to aim the target reticle, and a right thumb press for fire–while an accelerometer controlled maze mini-game must be completed to unlock certain doors. 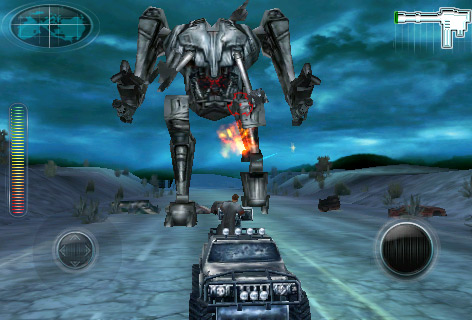 Terminator Salvation features eight different levels with a boss at the end of each and in-engine cut scenes spread throughout.  Six weapons are available to fend off the baddies: shot gun, grende launcher, gatlin gun, surge cannon, assault rifle, and T1 chain gun.  One aspect of the game is collecting memory chips, which allows for switching between weapons as well as collecting various art items (details on this are scant right now).

The game offers about 2-3 hours of playtime and the drama of finding out…is Marcus a good guy…or bad.

The development build of the game I played is graphically impressive and ran at a decent framerate on the first-generation iPod touch (the slowest member of the iPhone family).  In the brief time I spent with the title, I found it to be a pretty fun game to play but noted that the screen-swipe targeting controls, as opposed to, say, a virtual right thumb-stick, take some getting used to.

Terminator Salvation will be released during the first week of May and will retail at a premium price-point of $7.99 – $9.99.  We will take a much closer look when the game goes live.