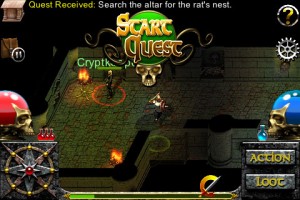 It seems like every time a “What would you like to see on the iPhone?” thread pops up on our forums, classic PC games like Diablo are always the first to be mentioned. If you’ve followed Touch Arcade for the last week, you’ve no doubt caught wind of Pixel Mine’s new RPG, Underworlds [App Store]. If something to satisfy a craving to hack and slash your way through hordes of monsters is what you seek, look no further than the twisting catacombs conveniently located just off the cellar of the Happy Cadaver Inn.

Your adventure begins as a guard for McTavish, the purveyor of a traveling caravan. After defending against an invading orc (which serves as a brief tutorial), he explains that your services are no longer required and suggests that you travel to the Happy Cadaver Inn  located in nearby town of Albrect to find work. To save time, McTavish opens a portal and a brief animated video introducing the Inn plays. Upon arriving you’re greeted by Kurgan who asks you to retrieve a bag of flour from the basement… Which just so happens to be loaded with bloodthirsty swarms of rats! 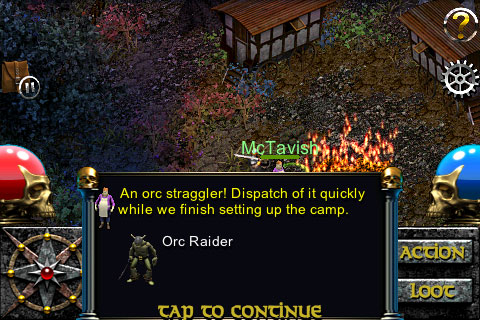 Your adventure continues from there, as you delve deeper and deeper in to the cellar of the Happy Cadaver Inn. Quests offered by various non-player characters flow together seamlessly with minimal backtracking, and while the overall plot of Underworlds isn’t exactly what I’d call revolutionary, it gets the job done. Boss fights occur at regular intervals, and killing them generally is the objective for most quests. After fighting your way through the underground, you emerge in a graveyard and eventually descend in to depths of hell in attempt to vanquish the source of the undead scourge plaguing the land.

Plenty of random loot drops off monsters which also spawn randomly each time you play, and each boss usually is guarding a chest full of gold, potions, and equipment. 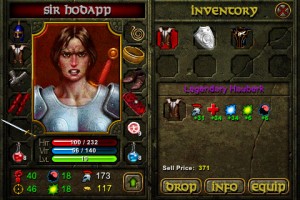 Underworlds features a detailed magical item system which results in quite a bit of managing equipment upgrades. For example, you might find yourself deciding between a chest piece which gives you more hit points, or one which increases your strength. Optimizing your equipment between the loot that is dropped and the gear available for purchase will feel right at home to veterans of RPG’s. On top of that, items are colored based on their quality similar to World of Warcraft, and in my play through I came across both a “purple” quality sword and chest piece. (And I didn’t even need to spend DKP to get them!)

During your adventure, you need to watch both your health and vitality which are represented in the skulls on each side of the screen. Much of the game revolves around intelligent management of potions which serve as the only way to keep you alive while battling the forces of evil and at 40 gold a piece, buying them consumes most of your early gold supply. Since potions completely restore your health or vitality when they’re used, I found myself playing a dangerous game of waiting until the absolute last second to drink one to get the maximum benefit which all too often resulted in my death.

When you run out of potions, or your inventory is full, you can use a teleport charm to warp back to McTavish’s caravan. Teleport charms can be purchased, however I found while playing through on the normal difficulty level that more than enough of them dropped and I was never in a situation where I needed to go back to town but couldn’t. Once you’re finished buying items, restocking potions, and emptying your inventory for gold, you can step through the same portal that you originally took to get to the Happy Cadaver Inn to be transported right back to where you used your teleport charm. 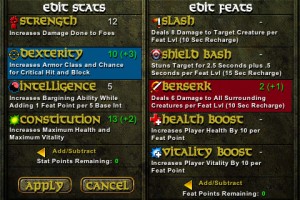 Like most RPG’s, character advancement comes from earning experience points and gaining levels. With each level game you’re given one point to spend on feats and five points to spend on increasing your base statistics. Putting points in to slash, shield bash, or berserk places icons above your experience bar which can be pressed to activate their effect at the cost of a small amount of vitality. Slash and shield bash are both important for boss fights, while berserk is very handy when dealing with swarms of enemies. Underworlds appears balanced enough that you don’t need to obsess too much over where you spend your points as I’m doing equally well on my second play through where I’m dumping everything in to intelligence as I did on my first play through where I equally distributed them. 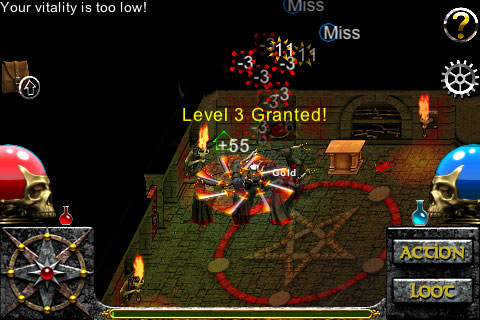 The art and sound design of Underworlds is top notch, and reminds me of both the Diablo series and later Ultima games. While the current version has no included music, Pixel Mine plans on including a soundtrack in the next update. If you follow my Twitter, you’ve no doubt noticed my constant Dungeons & Dragons tweets on the weekend and as an avid player of pen and paper games, Underworlds is really reminiscent of a D20-powered dungeon crawl. Similar to a good dungeon master, the game often offers flavor text on the top left corner of the screen telling you about sounds you hear and the entire combat system is based on behind the scenes attack rolls taking in to account your armor class and enemy weapon skill–Exactly like the things you compute by hand while playing Dungeons & Dragons.

The chief complaint in the Underworlds thread on our forums is the length of the campaign and the maximum level of your character being level ten. Most players seem to be completing the game in two to three hours. Pixel Mine has responded to these complaints by saying they’re already working on a second chapter. When I asked them if they could comment further on what they have in store for the future of Underworlds, they couldn’t offer any specifics, but had the following to say:

“Our plans are still open right now, we are still adjusting to things like the app store. … We want to really build this franchise. This genre is our passion, now that we know how to do it on the phone there are really no limits." 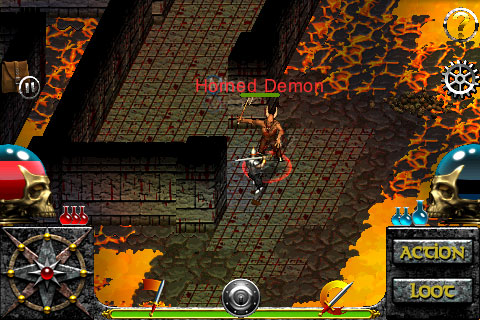 While I really enjoyed Underworlds, it’s by no means perfect. First off, I felt the controls were a little clunky. The virtual D-Pad is kind of hard to use, and I found myself accidentally drinking potions when I meant to move or hit a button. The best control method seems to be tapping in the game world to move, and using the buttons to attack and loot. With the interface elements taking up so much of the screen it would be nice if there was a way to customize them. I’d like an option to not only remove the virtual D-Pad entirely (which is already in place.), but also shrink the health and vitality skulls down to small bars to see more of the game world. 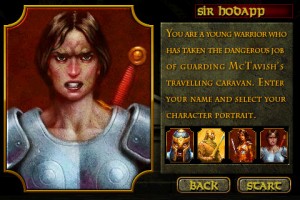 Your character model always stays the same regardless of what equipment you’re wearing, and currently character customization is limited to choosing your portrait at the beginning of the game, naming your character, and distributing your points after gaining a level. There is only one class, and while the loot and monster spawns will be different every time you play, the dungeons themselves always stay the same. Also, the bosses don’t really have any special abilities so boss fights seem to just be a battle over whether or not you have enough potions to stay alive while you chop away at their hit points.

Still, I feel these complaints are fairly minor and with a seemingly committed developer, I give Underworlds a strong recommendation to any hack and slash fan. I’ve had a great time playing through it, and I’m still having fun on my second time around. You can split hairs all day over whether or not $4.99 is “worth it” for a game with two to three hours of gameplay, or you can just pick it up and start smashing some skeletons.

While I can only speculate on what’s in store for the future of Underworlds, Pixel Mine has proven they’re capable of producing an amazing game that provides an immersive experience which should satisfy the craving of anyone looking for a  pocket-sized Diablo-like dungeon crawl.