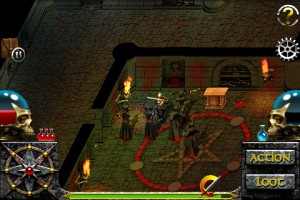 Last week’s announcement of Pixel Mine’s upcoming role-playing adventure seemed to generate a lot of interest. We’ve since put together this brief gameplay video based on an early-release copy of the game.

Underworlds is an action-RPG that features a classic Dungeons & Dragons level up system with feats and stat boosts. Your avatar can be controlled either by using the virtual D-Pad or by tapping in the game world to move and perform actions. You play a guard who has been asked to help discover the source behind mysterious activities happening around the town.

One thing to note about the game is that I’ve since learned that the action button does not have to be repeatedly tapped to fight. That aspect aside, the video should otherwise show a reasonable amount of early gameplay, including leveling up, healing and buying items in the shop.

The game has been submitted to the App Store so should be appearing at any time.