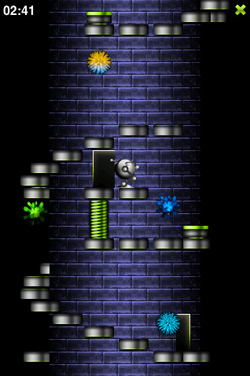 As in the original, your character (a robot, who replaces Pogo the frog) starts off at the bottom of a circular tower adorned, from bottom to top, with a series of platforms connected by a system of tunnels and elevators.  The goal is to make it to the top of the tower, dodging the creatures that guard it and watching out for cracked tiles, in order to unlock the next tower.  There are 16 towers in all (the original game featured eight).

A notable aspect of the game at the time of its 1987 release was the manner in which the tower is negotiated.  Rather than moving about the screen against a fixed backdrop, it’s the main character that’s fixed mid-screen while the tower itself rotates.  Even today, it’s an interesting twist to the platformer formula.

Power Toppler for the iPhone features basic sound effects, updated graphics as compared to the original, and swipe control of the on-screen robot, with a double-tap to fire.  While this is a retro title, it holds up very well today and should appeal to many gamers who enjoy a simple, unique platform experience.

See our very brief gameplay video for a look at the first tower.