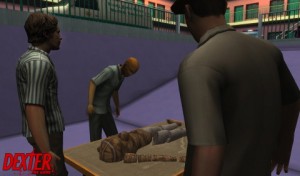 At GDC, TouchArcade met with Marc Ecko Entertainment who is publishing the Dexter iPhone game that is due out this summer.

This high profile game has received a lot of attention ever since its original announcement back in July and generated even more buzz after some high quality screenshots were released. While there had been some doubters about the possibility of such high quality renders on the iPhone, after seeing the game ourselves, we have to admit the graphics quality of the 3D rendering engine is remarkable.

The game engine was developed by Icarus Studios and is a port of their MMO engine. This engine is said to be rendering the full 3d environment with 30,000 polygons at 30 frames per second on the iPhone/iPod Touch platform. The high definition video embedded below offers a peek at the game. 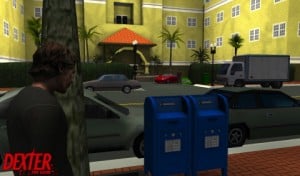 Meanwhile, the game itself seems to remain very true to the brand and television series with close tie-ins to the first season of the show. The game revolves around the main character Dexter who is a serial killer governed by a strict moral code. For every action you take, it may adversely or positively affect your “Mask" level, which must be maintained or you’ll be exposed. If you are entirely unmasked, the game ends.

Dexter plays as a 3rd or 1st person perspective adventure game in a fully 3d environment. Both “joystick" and tilt/button controls are offered and appear to provide a solid control system to the game. Also key to the gameplay is the collection evidence in different storylines to capture more victims. Stealth also plays a major role in the game and you find yourself sneaking behind obstacles in order to avoid detection while stalking your prey.

Once Dexter gets his victim back to his lair, you must try to force them to confess to their own crimes before killing them. The tools available to you include a cleaver, knife and bone saw, each with their own unique iPhone accelerometer gestures to use them.

This video shows several of the environments and control systems:

Overall, we were very impressed with what we saw. There is typically a bit of a stigma against these officially licensed games, but Marc Ecko Entertainment appears to be delivering a very high quality game in both iPhone experience as well as loyalty to the television show itself.

The game will be delivered in 4 episodes with the first out this summer. The first episode will deliver 8-10 hours of gameplay. All four episodes will be delivered by September, when the next season of Dexter begins. If you are interested in a further walkthrough of the game, another YouTube video looks at additional features of the game.