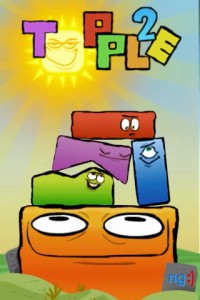 The premise of the Topple series is simple, you stack blocks of various shapes and sizes to reach a set altitude goal within the provided time limit. Blocks can be rotated to fit better in to the existing stack and the game makes excellent use of the accelerometer. If your tower of multicolored blocks isn’t as sturdy as you would like it to be, tilting the phone left or right causes your stack to lean, potentially giving you the extra bit of stability you need in order to not send everything crashing down. Ngmoco has had a spotless record of releasing great games, but at $2.99 is Topple 2 [App Store] a worthy addition to their all-star library, or are you better off sticking with the free original Topple [App Store]?

Topple 2 brings some new play modes to the party aside from just building upwards. Some levels are set underwater and you build towards the sea floor, the blocks then act similar to bubbles heading towards the surface. Originally I was rolling my eyes that ngmoco would even count this as a new method of play, since the game is just rotated. However, the blocks really do seem to behave differently underwater, and it provides a fun challenge as you’re forced to think backwards.

In Rescue mode, instead of just building upwards to the goal, you also have to escort a golden egg to safety back down your tower. Once you reach the egg which is sitting on a cloud just beyond the goal, it falls on top of your stack, at which point you can tap blocks to remove them. If the egg falls too far, it gets cracked. Crack the egg enough and you have to start over. Because of this, you can’t just haphazardly stack blocks to quickly reach the altitude required, like you can sometimes get away with in normal and upside down modes. Long straight yellow blocks need to be put on their side, and care needs to be given to always allow a place for the egg to land without sliding off.

So, not only do you need to build a tower which is stable enough to reach the goal, it also needs to be sturdy enough to be dismantled as you bring the egg down to the ground. The catch? The maximum of four blocks which can fall off the screen before you lose rule is STILL in effect on the way down! The difficulty of some of the later Rescue levels is downright brutal–especially when you’re given triangle blocks to work with, which send your egg bouncing one way and your tower flying the other. 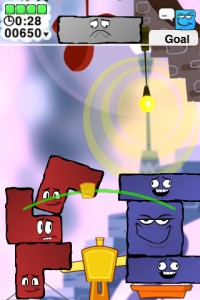 Balancer mode doesn’t get any easier. Instead of one stack, you have to make two on each side of a scale. They have to remain reasonably balanced between each other, but that’s not even where the difficulty comes in. The two towers of blocks cannot touch each other in any way. Also, while in the other modes the tilt controls can really save the day, in balance mode, you’re left with nothing but stable building techniques to reach the goal height. With both towers on each side of the scale, the effect of tilting the iPhone almost always does more harm than good.

The final game type is Power Tower, where you have to deal with two block types: normal blocks and power blocks. The power blocks must be connected to each other so they will all light up. Power Tower levels are complete when your stack of lit power blocks cross the goal. While the power blocks are all uniform in shape, the game is constantly throwing normal blocks at you, which you must stack out of the way. Unlike Balancer, your separate stacks can lean against each other, making this mode both significantly easier and yet still extremely challenging. 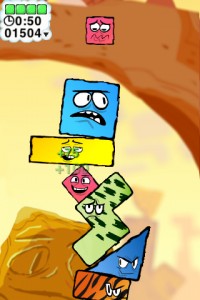 Most of the difficulty of Topple 2 comes from how downright nasty the random number generator that decides which block you get next can be. Triangle shaped blocks are particularly brutal, and have caused many otherwise perfect towers of mine to fail. Two triangles in a row? You’re done for. Some levels I ended up redoing so many times I lost count, particularly in later Rescue modes. I’m reluctant to call the difficulty involved in some levels a negative, because I definitely appreciate being challenged, but if you can’t make it through the 10 levels provided by the free version of Topple, you probably won’t make it very far in Topple 2.

A particular complaint I have with the game is the way it presents the levels to the player. You progress through a world map view in a manner similar to World of Goo, only able to play the next level on your path. If the Power Tower game mode sounds interesting to you, you need to play through 20 levels to even reach a Power Tower challenge. The first Rescue takes place on level 5, upside down starts at level 6, and you have to make it all the way to level 16 before taking a crack at Balancer. The world map view works fine for selecting the next level, but it would make more sense to have separate islands for each game mode, particularly on a mobile gaming platform.

The greatest letdown of Topple 2 is how thrown together the multiplayer feels. As a veteran of more Word Fu battles than I can even count, I was extremely excited to see ngmoco including a WiFi multiplayer mode in another one of their games. Starting a two player game amounts to two people on the same WiFi network running Topple 2 and tapping “Versus." You’re immediately thrown in to a game with any other person looking for one on your network, without any kind of confirmation, and the two player game is nothing more than a best of three match played in standard vertical build mode with a remarkably short goal height. When the best of three winner is decided, you’re tossed back out to the main menu. As much as I hate to say it, that’s really all there is to multiplayer.

On a performance level, Topple 2 runs just as well as the original, and in my hours of playing the game I only experienced two crashes–both of which took place while descending on Rescue mode, which was frustrating. The music is great, the graphics are colorful, and it’s really amazing how much character the game has. Each block makes different facial expressions, from the smug smile of the large squares to the appropriately menacing looking sharp-toothed triangles. Like all ngmoco games, the fantastic art style does nothing but add to an already solid game.

If you appreciated Topple, picking up Topple 2 at $2.99 is a no-brainer. The sharp difficulty curve and multiple game modes should keep fans of the original busy for quite a while. A basic achievements system, combined with being awarded stars for completing levels and beating various score thresholds, should provide a decent amount of replay value. If you’re new to the series, pick up the first one for free [App Store] before making the plunge to Topple 2. As stated previously, if you can’t make it through the few levels which make up the original, you’re not going to make it very far in the sequel.