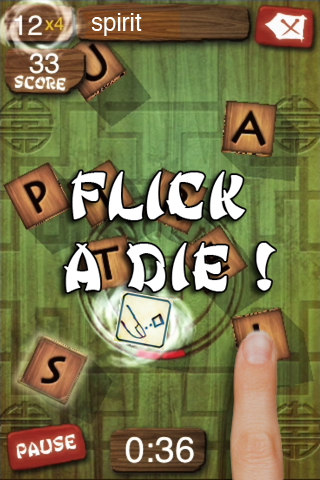 Ngmoco has released their latest game to the App Store. This time it’s a word game called WordFu [App Store]. The game is available for an introductory price of $0.99 and falls in their category of so-called “fast" apps which aim to deliver high quality games at low prices.

WordFu is a word-finding game that’s described as “the ultimate word puzzler" which incorporates the use of realistic on-screen dice with word finding.

The game’s 3d dice resembles our favorite dice roller Mach Dice — and for good reason. It appears Ngmoco has licensed the Mach Dice dice engine for the game. That means you get the same realistic dice rolling and pseudo-3d perspective with tilt that also comes with the original app.

The game itself is simple at its core, but is delivered with the style and polish we’ve come to expect from Ngmoco’s titles. You are presented with 9 dice with different letters on each side. You are given a bit of time to shake your phone to rescramble the dice or you may simply choose to re-roll a single die by flicking it. Once you are happy with your set of letters (or time runs out), you can start the game which gives you 45 seconds to find as many words as possible. Letters can be used more than once per word in standard mode or can be limited to one use in Shaolin mode (see options). As you progress, you can even get power-up dice which offer special abilities including freezing time, rerolling one die, and doubling your score.

Here’s a developer video showing off some of the game:

At only a $0.99 introductory price, it’s seems easily worth it.