Retro gaming fans–those partial to the Commodore 64 in particular–will be pleased to hear that a port of the classic 1985 Hewson title, Paradroid, has come to the iPhone and iPod touch in the form of Droidz [App Store] from Glen Ames. 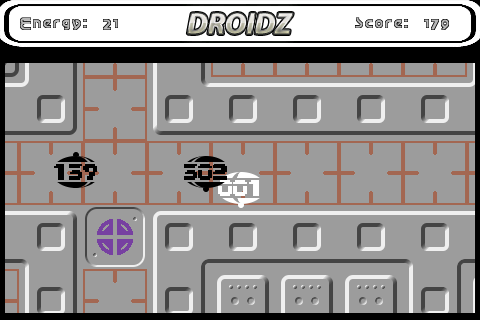 As Wikipedia describes the original,

The game is set on a spaceship viewed from a top-down perspective. The ship consists of numerous rooms and levels, each one populated by hostile robots or “droids". The player, in control of a special droid called the “Influence Device", must destroy all the other droids on the ship. Each droid (including the player) is represented as a circle around a three-digit number. The numbers roughly correspond to the droid’s “power" or “level", in that higher-numbered droids are tougher to destroy.

Taking over a droid is done via a mini-game involving basic circuit diagrams and logic gates. Each droid has one side of the screen, with a series of logic gates and circuits connected together. The droids have a number of “power supplies" that can apply power to one circuit. Higher-numbered droids have more power supplies. At the end of a short time period, the droid supplying the most power to the circuit “wins". The logic gates are the key to allowing lower-numbered droids to beat higher-numbered droids. There is also a strategy in timing when power is applied to a circuit (as two supplies of power to the same circuit result in the later supplier of power gaining control of the circuit).

Droidz utilizes accelerometer control for movement and a tap in the direction of an enemy for firing.  The game features a 16-level ship from which the player must clear all droidz.  Once a level is clear, it will shut down and other levels can be explored by way of elevators.  Droidz features audio similar to the original and an updated set of graphics taken from the Freedroid project.

A review of the original Paradroid (published last year) lavishes the game with high praise.

Paradroid is an absolute masterpiece. The keyword is balance: Where most shooting games restrict themselves to a linear path of upgrading weapons, the power is inversely proportional to the time it can be used here. So the player is always on the run here, jumping from robot to robot, always anxiously watching the remaining time until burnout. Not to be missed!

See our brief gameplay video to see a bit of the action.  A video of the C64 original can be seen here.

It’s worth mentioning that Droidz is very much a retro title.  Those without an early attachment to the original may well find the gameplay and overall presentation somewhat basic as compared to today’s shooters.