When the iPhone was first unveiled by Steve Jobs during the Macworld 2007 keynote, most of the people in attendance stared in slackjawed amazement.  During those two hours we were exposed to perhaps the most innovative mobile device ever created.  So much cutting edge technology all wrapped up in a multitouch / accelerometer-based package.  And when, a year later, Apple announced the freely available iPhone SDK, it was immediately clear that what we’d seen from the iPhone so far was just the tip of the iceberg.  And my first thoughts?  Gaming–and no surprise.

We knew then that amazing things were to come… And they have.  There are currently over 20,000 applications in the iTunes App Store–a large number of them games.  And while, true, many (most?) aren’t particularly noteworthy, there are some true gems out there.  But of those precious gems, which shone the brightest?  Which best utilized the iPhone’s unique combination of controls?  That was a hard question to answer.  A hard question to answer–until Secret Exit’s Zen Bound [App Store] made its debut. 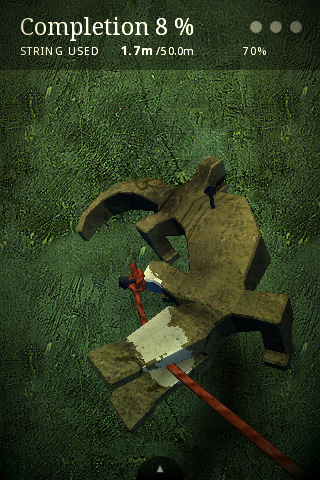 I usually save the overall assessment until the end of the review.  But I will go ahead and say it up front: Zen Bound is the most polished and ideally suited game created for the iPhone platform.

Zen Bound involves wrapping various shapes of stone and wood–blocks, whales, birds, and the like–in a paint-soaked rope in order to, as completely as possible, cover them with paint.  It sounds like a basic and perhaps bland proposition, frankly.  But as Secret Exit suggests, it’s a calm and meditative experience.  And I can tell you–not a boring one. 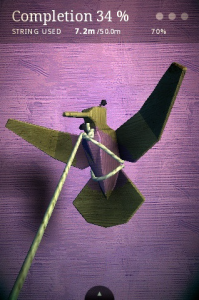 The game features 51 levels across two different paths: Tree of Reflection and Tree of Challenge.  The former consists of animal shapes, the latter more basic geometric objects.  Both routes present the player with a tree that winds its way upwards, adorned with a variety of shape symbols, punctuated by lanterns.  Selecting a shape symbol brings forth the indicate 3D object to be wrapped with rope.  Each lantern is marked with a number that indicates how many flowers must be acquired in order to light the shapes above it.  It is possible to achieve up to three flowers per object, depending on the percentage of the object that you are able to cover in paint.  (To achieve three flowers requires 99% coverage.)

Each object presented is shown suspended in mid-air in front of a backdrop.  The graphics quality of everything onscreen–object, backdrop, rope, and lighting–is superb.  The objects look very realistic and exhibit high quality texture filtering and glass-smooth animation.  The game presents some of the best graphics I’ve ever seen on the iPhone.  A soothing audio track plays throughout with realistic rope creaking sounds that add greatly to the overall experience.  The game features binaural audio processing that, when used with headphones, creates an enveloping soundscape that is truly immersive. 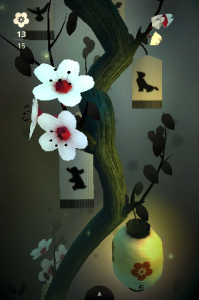 When we inquired into the game’s release date with Secret Exit back in January, they underscored the fact that they were more focused on polish as opposed to the earliest release date with Zen Bound.  And while screenshots and gameplay videos clearly demonstrate the high level of polish to the game’s visuals, what’s less easily noted is just how well the touchscreen controls have been implemented.  The onscreen wooden objects can be smoothly rotated in any direction with a single-finger swipe and can be spun radially with two fingers.  The angle of the rope is determined by the orientation of the iPhone.  This all comes together to provide a control system that is, in a word, perfect–it truly makes you feel like you’re rotating an actual object in 3D space.

Zen Bound really does cause you to get “lost" in a play session.  And the more you play, the easier it is to become fully engrossed, thanks to the increase in skill that comes with experience.  And while a PC version of the game exists, its control setup is nothing compared to that of the iPhone version.  It’s really an iPhone exclusive.  I’ve found myself holding my iPhone at a distance during gameplay on the daily subway commute so that bystanders might see it, so impressive are its visuals and gameplay mechanics.

Any reader who finds some degree of appeal to what I’ve just described owes it to him or herself to download Zen Bound and spend some quality time with it.  It’s a wonderful game that perfectly exemplifies just what the iPhone is capable of as a game platform.  I can’t recommend it highly enough.

Secret Exit and a dozen other companies are presently sponsors of this site, but that does not affect our choice of coverage or influence our review. We simply love this game.