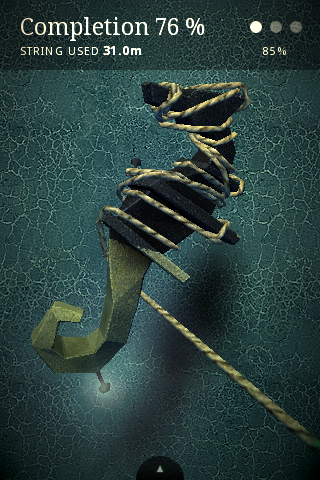 Secret Exit’s Zen Bound [App Store] has finally made its way into the App Store.

We’ve been talking about this title since September after the developers provided us with a teaser video of this unique game.

The game is described as a calm and meditative puzzle game about wrapping wooden sculptures with rope.

A game in which a high score is not the goal – instead it is something to focus on and enjoy at your own relaxed pace.

It is a tactile experience: a game of wood, stone and rope with the most beautiful graphics yet seen on the iPhone. The visuals complement the controls to provide interaction that feels natural and comfortable.

Zen Bound makes very good use of the iPhone’s touch display to provide direct manipulation of the objects you are rotating. iPodTouchLab provides this hands-on gameplay video that lets you see the controls:

The game has already won the International Mobile Gaming Awards for “Excellence in 3D" and is a finalist for “Best iPhone Game" and “Audio Achievement" in the Independent Games Festival Mobile 2009 awards.

We’ve had a chance to play the game for the past week and our full review will be up shortly. Our conclusion, however, is that this is one of the most polished and technically impressive games available on the iPhone and, if you’ve had any interest in the title, we highly recommend it.

Meanwhile, long time computer enthusiasts might not be surprised to learn that the engineers at Secret Exit all have a background in the demoscene (specific examples: ix, Assembly 2004 invite, The Line Age, San Angeles Observation).