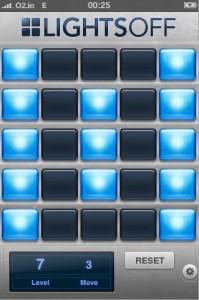 In August 2007, the first native iPhone game was released by Lucas Newman and Adam Betts.

It was called Lights Off and was a clone of an old electronic game Lights Out. At the time, the App Store had not yet been announced and so the only way to install the game was to jailbreak your iPhone. Still, it was a sign of things to come and showed the first example of the iPhone as a gaming device.

Lucas Newman has since been hired by Apple, but this official App Store release [link, $1.99] has been inherited by developer Steve Troughton-Smith and the original artist Adam Betts. The game was rebuilt from scratch with a brand new engine but keeps the polished look and feel of the original.

The game is a simple (yet potentially frustrating) puzzler in which a tap on the screen will toggle the surrounding lights. The goal for each level is to turn off all the lights. There are 212 levels and this new version adds sound effects to the game. Future versions are expected to add internet features, bonus levels and themes.

This video shows the basic gameplay. The actual game does have sound effects which were not recorded in this video: