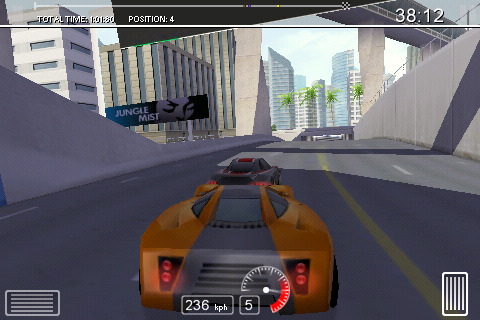 Atod AB’s Fastlane Street Racing [App Store] has been put on sale from its original price of $5.99 down to $3.99. The racer has been received a significant following in our forums with active participation from the developer.

Our own review of the game called it the “best looking, best playing racing game in the App Store." The only caveat to that claim is that the there was a significant learning curve to master the drifting technique of the game. Based on user feedback, however, the developer has revealed that an “Easy" mode will be introduced in version 1.1 which is currently in beta testing:

The big change in this Update is that you will be able play the entire game in “Easy Mode" which affects everything from AI skill and checkpoint time to car handling. The original difficulty is still there, but it is called, appropriately, “Hard Mode"

We have also added a batch of options such as the oft requested camera tilt to compensate for tilting the phone to steer, and some helpful things like auto-acceleration, and brake-only drifting, which should help advanced players like bhagwad who want better control over when they drift and when they corner. We will release a full list when we release the update soon.

With the delay of Need for Speed until 2009, this may be the opportunity to pick up an very impressive racer for the iPhone.