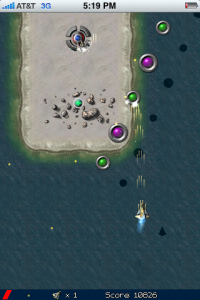 As the developer describes it, Sentry Alpha is “a nonstop battle through seas, deserts, snow, and mountains against hordes of relentless aliens."  It’s a vertical scrolling shooter featuring varying environment backdrops that’s rather reminiscent of the classic arcade shooter Xevious.  The game features accelerometer control and two fire modes: a standard mode where a touch anywhere on the screen fires and an autofire mode where a touch to the screen casues the player’s ship to fire harder, as it were.  Additionally missiles and bombs are deployed by jerking the iPhone in particular directions (which is a little awkward when the screen is crowded with alien enemies).

Features as listed by MindTrick:

Sentry Alpha feels somewhat slow-paced, which was concerning at first, until it became clear that the onscreen action ramps up notably as the game progresses.  It’s something akin to the feel of the Amiga / Atari ST classic Xenon 2–slow-paced but hectic, if that makes sense.

Have a look at our brief gameplay video to get a better idea of what I’m talking about.