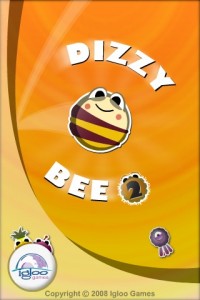 Dizzy Bee’s premise seems simple enough: tilt your iPhone to direct Bee to free the fruit and then to the exit.

And for the first level or two, you think to yourself that this is just a fun and easy exercise. Once “baddies” are introduced, however, you realize you have to take into account their movements which are also affected by the same tilting/gravity.

Dizzy Bee 2 refines this original concept by adding new levels, enemies, and power ups. A full list of improvements provided by the developer include:

Dizzy Bee 2 should become available within the next week for an introductory price of $2.99.