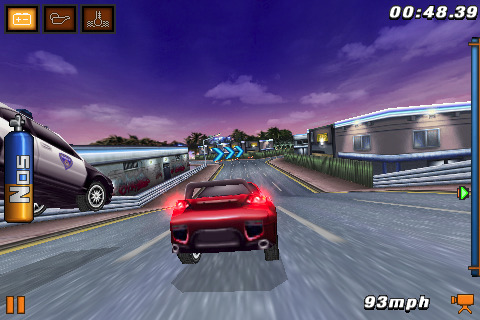 I-play has released a new racer for the iPhone called Fast and Furious: Pink Slip [App Store]. The $5.99 mobile game was recently previewed by IGN who had a chance to play with an early BREW and Java version.

Designed as a pure arcade-style racer instead of a more narrative-driven game like the previous entry in the series, Fugitive, Pink Slip is exactly what the title promises: A series of breakneck races where your wheels are always on the line. The racing is spread across several different events, from drag racing to drift runs, but with one singular goal — fill your personal garage with some of the flashiest rides straight from the films, including a special appearance by Dom’s muscle car from the original Fast and the Furious.

Features listed from the iPhone version description include:

The four racing modes are described as drift racing, drag racing, point 2 point and police chase. i-play has provided this trailer of the game showing some fun looking gameplay: