Some of the most intense, adrenaline-pumping racing action ever seen on a game console comes thanks to the futuristic, anti-gravity racing franchise, Wipeout. The original, highly acclaimed Wipeout from Psygnosis made its debut on the PlayStation back in 1995 and put the player in the pilot’s seat of a variety of sleek anti-gravity racing vehicles. The game challenged them to hurtle at breakneck speed down a series of unearthly metallic tracks while dodging enemy mines, missiles, and various other futuristic forms of weaponry. The sense of speed and immersion was immense and made for a pure white-knuckle gaming experience.

I’m a huge fan of the franchise and have been since day one. (In fact, it was Wipeout–alone–that prompted me to buy my first PlayStation.) As such, it has pained me to realize that there will never be an official Wipeout title brought to the iPhone, as Sony now owns the franchise and Wipeout Pure and Wipeout Pulse are two of the best PSP games around. And that’s a real shame given just how ideal a platform the iPhone is for the game, what with its accelerometer control and beefy processor.

And so it must come as no surprise that CobraMobile’s demo video of their then-upcoming Low Grav Racer (posted back in October) got my full attention. It was quite clear that with Low Grav Racer, the developer was clearly trying to bring the Wipeout experience to iPhone gamers. And now, at long last, the game has arrived in the App Store. 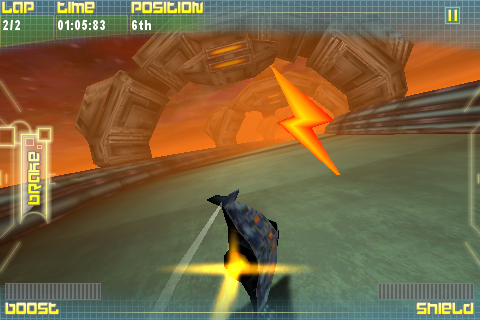 So, is it a worthy take on the Lord of Futuristic Racers? Let’s have a look.

Low Grav Racer is part of mobile developer CobraMobile’s “Only for iPhone" product range.  In the launch press release

Set in the far future, mankind has spread throughout the solar system, terra‐forming planets and moons such as Mars and Titan and edging ever farther to the depths of space. The spirit of the Wild West is alive and well in this new frontier however, so is the profiteering and the danger. The largest of the independent Space Corporations have developed a number of extreme ‘space sports’ for entertainment and gambling; Low Gravity Racing is the number one sport. It is a dangerous but speedy way for brave or just plain crazy pilots to make a name for themselves and get rich quick. 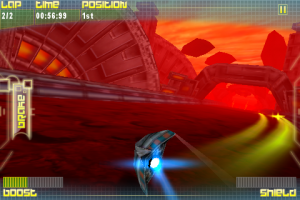 As in Wipeout, Low Grav Racer puts the player in control of a futuristic racing craft that hovers above a metallic track littered with weapons (Omega Mines, Alpha Missiles, Trident Missiles) and power-ups (Speed Boosts and Shields).  There are three vehicles to choose from across four different difficulty classes (with increasing top speeds).  There are 12 planet-based tracks in this intial release, but the developer promises more will be included in future updates.  The game features two play modes: Single Race Mode and Competition Mode.  Single Race Mode allows for a quick race from among any of the tracks unlocked in Competition Mode by finishing the race in one of the top three positions.

As the game begins, the player’s craft and five other computer-controlled vehicles sit at the starting line waiting for the countdown.  Once the race begins the objective is, of course, to cross the finish line first.  Getting this done, however, isn’t just a matter of wisely negotiating corners and avoiding impact with the other racers.  Avoiding their missiles and and dodging their mines is a big part of it, as well.  (This is, after all, futuristic racing.) 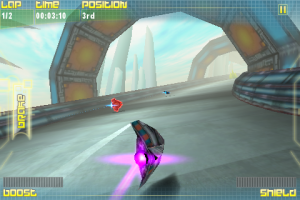 Low Grav Racer features accelerometer control for steering and touchscreen control for braking and activating weapons picked up along the way.  The first thing one will notice about the controls is that they are extremely sensitive.  At first I was having difficulty keeping the craft off the walls, as I kept overcompensating in each turn, but after about half an hour of play they started to feel just fine.  The ability to adjust control sensitivity, however, would be a welcome addition in an update and is a rather standard option in most such games.

In the visuals department, Low Grav Racer impresses.  The game offers varying scenery across the different planet venues, each with its own set of landscape structures: hovering asteroids, alien towers, spinning machinery, etc.  The game features a moderate draw-distance, and as such there is pop-in, but subtle fog-effects help minimize the distraction.  while maintaining a fluid framerate.  Only occasionally did Low Grav Racer exhibit very slight slowdowns on my iPhone 3G.  And while the external, from-behind view of the player’s ship is sufficient, I would have appreciated a from-the-cockpit view option as well–it’s this vantage, with the track swaying wildly at each turn, that adds such a level of immersion to Wipeout.  A pumping techno soundtrack and “3D spacial sound" effects (which actually do sound “spacial") add positively to the atmosphere. 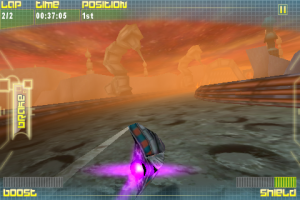 So how does it play?  After spending several hours racing the otherworldly circuit that the game presents, I can assure readers that Low Grav Racer is a very engaging and enjoyable racer with a solid replay value.  There is enough track / scenery variation that the game does not feel monotonous during long play sessions.  The sense of speed and overall racing feel is excellent, although for those unaccustomed to racing outside of the traditional tire-on-road (and to a lesser degree boat-in-water) scenario, the game may take some getting used to.

And is it Wipeout?  Well…not quite.  As I have indicated, Low Grav Racer is a good iPhone racing title, but the legendary Wipeout features more track complexity and an overall more clever track design.  As well, Wipeout‘s racing experience is a bit more frantic and intense than that of Low Grav Racer.  But that’s no real insult to this CobraMobile offering.  Wipeout started life as a groundbreaking racer and has had nine installments through which to better its racing experience.