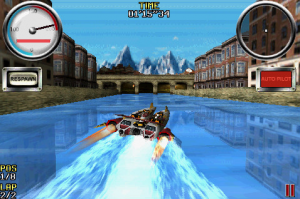 Polarbit, the developer behind Crash Bandicoot Nitro Kart 3D and Raging Thunder has released another racing game for the iPhone.  This time though, it’s an acquaitc affair in the vein of Midway’s Hydro Thunder.  Wave Blazer [App Store] puts the player at the wheel of a high-powered jet boat that races along various harrowing courses in an effort to grab the gold.

It takes a certain kind of person to strap themselves down in what basically amounts to an over-sized arrowhead with a four-thousand horsepower helicopter turbine engine lodged in the back-end. Right about now you need to ask yourself “Am I that kind of person?"

Indeed.  Wave Blazer offers both single player and online multi-player gaming, though we were unable to test the latter due to a current lack of online opponents (as it’s a new release).  There are several mode to single player play.  Grand Prix is a race against computer controlled opponents while Time Trials mode is a race against the clock.  Those wanting a quick fix will find the simplistic Arcade mode to their liking.

Wave Blazer feels much like Raging Thunder, really.  The 3D visuals look nice but are not groundbreaking and the framerate could use a little improvement at times.  The game features accelerometer control in a default “auto acceleration" configuration.

Fans of Raging Thunder or Hydro Thunder may find Wave Blazer worth a look, noting that it’s a more simplistic title than Midway’s acclaimed water racer.

Fans of this game may also enjoy Fishlabs’ Powerboat Challenge 3D [App Store], which was recently reduced to $1.99 (from $5.99).